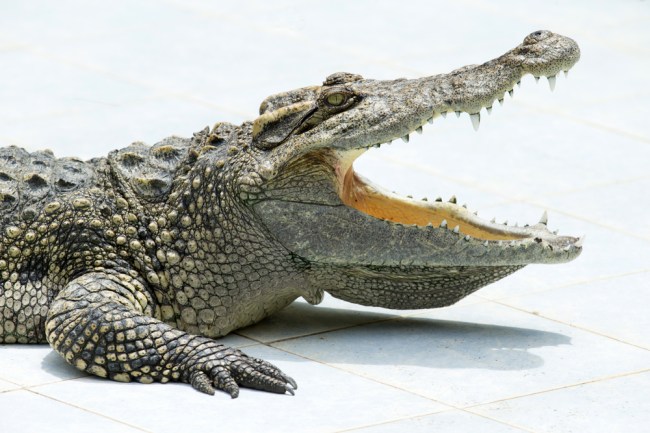 A Sarasota, Florida family with a screened-in pool received the shock of a lifetime when they looked into the pool lights to find a massive 11-foot alligator swimming around like it owned the place. This is a story near and dear to my heart because it happened in my hometown (Sarasota) and in a neighborhood adjacent to Oscar Scherer State Park where I used to have a ton of Boy Scouts camping trips as a kid.

Upon finding the 11-foot alligator had taken up residence in their swimming pool on Saturday night the family had to call in the Sarasota County Police Department who then called a trapper to have the massive reptile removed. The entire ordeal was caught on camera and it’s made national headlines:

‪So, remember that #gator call we went on earlier? Here’s some video as the trapper pulled him from the swimming pool. Did we mention he measured 11 feet long?! #TweetFromTheBeat #NeverADullMoment #OnlyInFlorida ‬

Instead of opening the screen door and letting himself in for a dip the alligator decided it was easier to barrel through the screen. So not only did the family have to spend their Saturday night with a gator in the pool but they now have to re-screen their patio which is just salt in the wounds.

This all happened in Sarasota County in a neighborhood called Calusa Lakes which is adjacent to a lot of undeveloped lands. Anytime you’ve got a large swath of undeveloped land in Florida that means one thing: wildlife is in abundance. In this case, there are tiny ponds and lakes all over the place that have been home to massive alligators since before Ponce de León landed in Florida. So it’s not *really* surprising that an alligator would find its way into a pool in this area but it is still shocking when you see these photos.