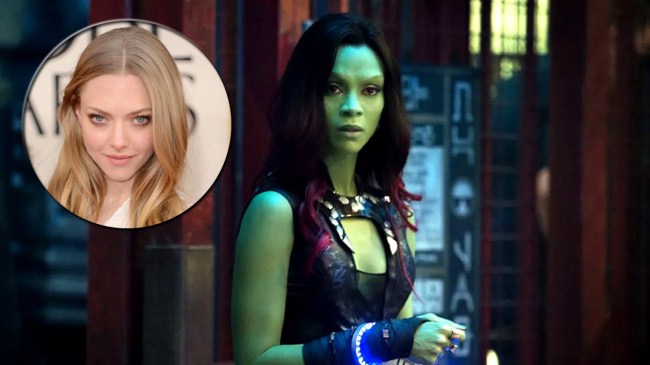 So, were you aware that the role of Gamora in Guardians of the Galaxy – and eventually the Infinity War saga – was originally offered to Amanda Seyfried?

This is not new news, but it might be to some as Seyfried hasn’t talked about it much.

She did say back in 2015 that she wouldn’t be caught dead in a superhero costume, so yeah, her playing Gamora? That was never going to happen.

In an interview this week conducted by Comicbook.com to discuss her new film You Should Have Left, Seyfried talked about being offered the role of Gamora, why she turned it down, and if she regrets not taking it.

“I think about it often,” Seyfried said when asked if she has thought about turning down the part since then.

Not that she doesn’t appreciate the Marvel Cinematic Universe. In fact, she says her daughter is a big fan of the characters who appear in it.

“It’s not movies, it’s books that my friend Morris Katz actually wrote a bunch of super hero books, and kids love it,” said Seyfried. “It’s about being kind, and what each super hero does. And the one we read today is about villains. She’s been carrying around that book. And it’s just, I mean, she’s into Raven right now. Like she likes to be Raven in the shower, but I don’t think she knows enough about what everybody does, but she knows what they look like, and what their powers are. I think it’s cool. I think these books are genius. But no, she hasn’t seen any movie.

“I’m not really a Marvel movie watcher, which is, I think, why I was just like, ‘Eh, I don’t wanna be green. It’s just so much work.’

“I remember Jennifer Lawrence talking about once how long it took her to get blue. And I was like, ‘That seems like hell on Earth,’ because then you get to set and you’re only there for a couple hours, and then you have to take everything off. And that was literally the reason.”

“But… maybe I should have done it!” she said with a laugh.

Check out the full interview below which also features a discussion with Kevin Bacon, filmmaker Jason Blum and director David Koepp.