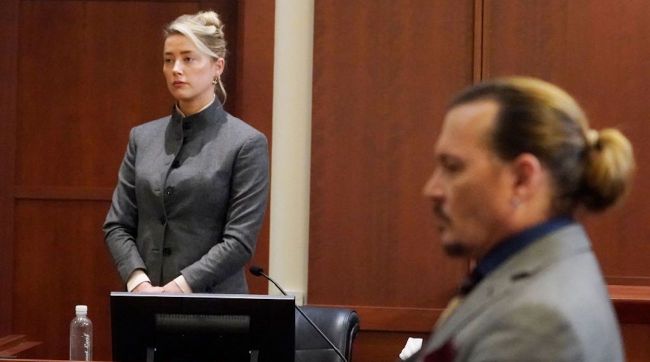 During her recent testimony in the ongoing defamation lawsuit, Heard, 36, denied that she left “human fecal matter” in the couple’s bed and instead claimed that it belonged to one of their dogs.

“What if any issues did Boo have with bathroom problems, if you will?” Heard’s lawyer, Elaine Bredehoft, asked her client on Monday. She replied, “She had eaten Johnny’s weed when she was a puppy and had bowel control issues for her entire life, among some other issues, we regularly had to take her to the vet. She had some control issues.”

Depp, who said Heard’s allegations of domestic abuse have cost him “everything”, is suing his ex-wife for $50 million in the ongoing defamation lawsuit at the Fairfax County Circuit Courthouse in Virginia. The trial, now in its fifth week, is set to continue over the next few days.

Heard has also testified that the ongoing saga between the pair has negatively impacted her career, as she claims a bunch of her scenes were cut out of the upcoming film Aquaman and the Lost Kingdom.