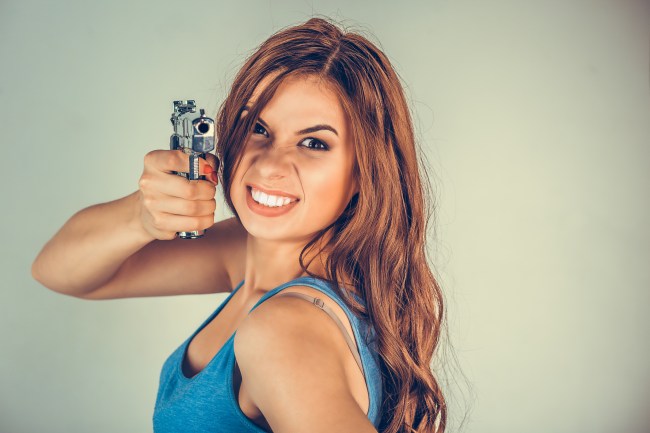 The nation has entered a veritable Thunderdome, and more Americans are packing heat just in case the whole scene deteriorates into a post-apocalyptic wasteland of radical rule. Although this might sound extreme, a new report from the Transportation Security Administration (TSA) shows that screeners are now finding more weapons on passengers than in a prison shakedown.

TSA discovered 200% more guns in carry-on baggage in July than this time last year. It’s a sign that the nation is experiencing a fit of extreme paranoia, likely brought on by the fact that we are smack dab in the middle of a pandemic and experiencing the highest unemployment rate since the Great Depression. Or maybe it’s just because they want to be ready for any clown who gives them crap for not wearing a mask. Whatever the cause, TSA says more passengers are showing up to terminals loaded for bear despite the fact that fewer of them are passing through.

Not to alarm you, folks, but this increase in firepower in airports across the nation could indicate that mayhem is brewing. While the latest briefings from the White House are intended to convince civil society that we are at the tail end of the sickness (it’s all going to be over in November, according to conspiracy theorists), the population appears to be growing more unnerved by the reality of the situation with each passing day. Enough to invoke their Second Amendment rights, throw caution to the wind, and do everything in their power to board commercial airlines with loaded weapons. TSA officers discovered 15.3 guns per million people last month as opposed to the 5.1 guns per million uncovered in July of 2019. And 80% of them were loaded. The agency said this is “particularly alarming,” considering that there are 75% fewer passengers this year.

The agency is urging travelers to calm down.

“TSA is diligently working to ensure our employees and passengers are safe and secure while traveling during a pandemic, and yet we are noticing a significant increase in loaded firearms coming into checkpoints,” TSA Administrator David Pekoske said in a statement. “Travelers must understand that firearms are prohibited items at airports and in the passenger cabins of aircraft. As hard as we are working to mitigate other risks at this time, no one should be introducing new ones.”

Listen, folks, it’s not that you aren’t allowed to bring firearms when flying the friendly skies. But there’s a way to do it without getting into trouble. Passengers may travel with their pistols in checked baggage after declaring it with the airline. All firearms must be unloaded, packed in a hard-sided case, locked, and tucked away separately from ammunition. These are the rules if you want to travel with a piece. But not under any circumstances are guns allowed in carry-on baggage. Anyone who tries to get one through security can be fined starting at $2050 for an unloaded weapon and $4,100 for one that is loaded. In some cases, these fines can reach $13,669 per violation.

But if the pandemic really has you paranoid to the point of not feeling safe when flying without a weapon, TSA does allow things in your carry on like corkscrews (without a blade), coat hangers, nail files, screwdrivers (shorter than 7-inches), and staplers. A resourceful man will find a way to use any one of these things to protect himself just in case something pops off at 30,000 feet.