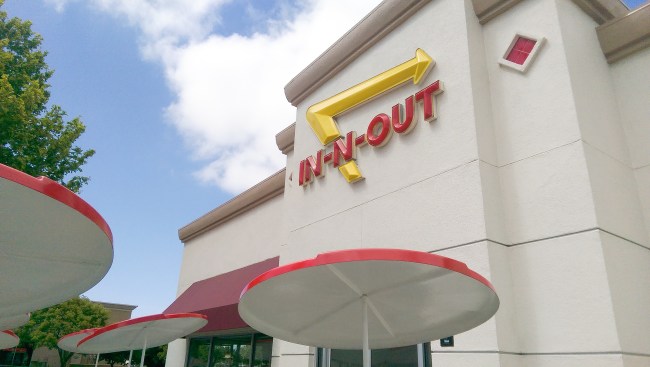 Californians are pretty chill about most things but when it comes to In-N-Out they become extremely serious. They firmly believe that In-N-Out Burger is the single greatest burger chain the world has ever known and there’s not even a close second place. As it turns out, they’re wrong.

For the second year in a row, the rest of the nation disagrees with the West Coast and East Coast cult favorite Five Guys burger has been named as the #1 burger chain in America according to the Harris Poll’s 30th annual EquiTrend study. The poll surveyed 77,031 participants on the ‘brand equity’ of 17 different burger chains including Whataburger (my favorite in college) Hardee’s, Shake Shack, Sonic, Culver’s, White Castle, Carl’s Jr., Checkers/Rally’s, DQ Grill & Chill, Burger King, McDonald’s, Wendy’s, Jack in the Box, Five Guys, In-N-Out Burger, Steak ‘n Shake, and Smashburger.

Why did Five Guys beat out In-N-Out Burger? Here’s the explanation from Yahoo! Finance:

“Brand equity” is based on three key variables: familiarity, quality and future consideration.
In the battle to win over customers, it all comes down to ubiquity, according to EquiTrend Director Amir Kanpurwala.
“In-N-Out has slipped from its high. The other players are claiming mind and market share. Five Guys has expanded at a much faster rate. In-N-Out has taken a slower approach to expansion, and its locations are geographically contiguous — mostly on the West Coast,” he said.
“Familiarity holds In-N-Out Burger back in the standings as a majority of consumers “just know the name” of the brand (35%),” according to Kanpurwala.
There is a wide pricing disparity between the two brands. A burger at Five Guys starts at $7 while you can grab one at In-N-Out for $2.10. Kanpurwala noted that pricing does play a factor, but doesn’t translate to less brand power. (via)

It’s very likely that In-N-Out Burger would be America’s #1 burger chain if they were to expand to more locations. In-N-Out has 330 locations in six states while Five Guys have 1,500 locations globally and plan to open another 1,500 locations.

For my money, I’m ranking Shake Shack as #1, In-N-Out at #2, and Five Guys at #3. I’ve eaten Five Guys at least five times and every time I want it to be good but it lets me down. The bacon tastes like garbage. The bun is too big and dry. And their signature fries really aren’t great at all. Meanwhile, I can’t say that I’ve ever been disappointed by Shake Shack or In-N-Out.