Amy Schumer Threatens To Unleash More Of Her Comedy, Humanity Recoils In Horror 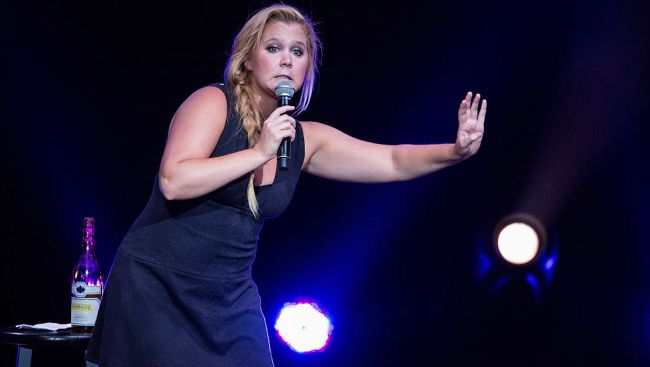 Viewership of the Oscars has been plummeting for years now, so in an effort to boost its audience, the Academy decided to… not broadcast crucial categories and hire Amy Schumer as one of the three hosts? Well, okay then — good luck.

Already annoyed that the Academy is axing documentary short, film editing, makeup and hairstyling, original score, production design, animated short, live-action short, and sound from the Oscars broadcast, excitement for the once-proud ceremony has only further decreased following these recent comments from Schumer, who is set to host the show alongside Regina Hall and Wanda Sykes.

Speaking to The Hollywood Reporter, Schumer teased one of the jokes she wrote that ultimately didn’t make the cut: “My husband is going down on me, or as he calls it, Squid Game. So, he’s in my Nightmare Alley…”

Instead, Schumer says, she’ll be “take a couple of risks”:

She’s still trying to figure out how much she can and should push the envelope on Hollywood’s biggest night — or at least its most prestigious. She’d pitched the show’s producers a few ideas over Zoom a month or so back, which were met with deafening silence. “I was like, ‘Can you guys hear me?’ ” she says, laughing about it now.

Her many “pussy jokes,” as she characterizes the subgenre, are unlikely to make the cut — certainly not the raunchy bit she’s written, which starts off, “My husband is going down on me, or as he calls it, Squid Game. So, he’s in my Nightmare Alley …” Instead, she says she’ll likely take “a couple risks,” but stop short of anything that would get her sued: “I emailed my lawyer about two jokes the other day, and he was like, ‘No!’ ” [via The Hollywood Reporter]

Once current movie and former Oscars fans got wind of Schumer’s latest gags, the reaction was quite predictable: please, stop.

Comedic genius like this is what they cut a bunch of awards categories from the broadcast for. #Oscars https://t.co/WRA6pqK8Io

Why are you making SQUID GAME jokes at the Oscars? It’s not even a movie. https://t.co/xmNTh3i1Q7

I think Hollywood has a psyop to discredit female comedians by only platforming ones like this https://t.co/H8R97wabav

I genuinely feel bad for women in comedy that are genuinely funny and write their own material that get outshined by Amy Schumer. https://t.co/p42shIrkBc

amy schumer was gone. dead career. why did they have to bring her back

And they went with Amy Schumer. https://t.co/5ILbzpFyfm

People who worked their whole lives editing films won't have their achievement recognised on screen so we can hear more jokes from Amy Schumer. https://t.co/nC9engnZfG

actually a contender for the worst joke of all time https://t.co/gTNFQKBIZf

The 2022 Academy Awards will be held at the Dolby Theatre in Los Angeles on Sunday, March 27. Given what you’ve just read about Schumer, we certainly wouldn’t blame you for ultimately tuning out.