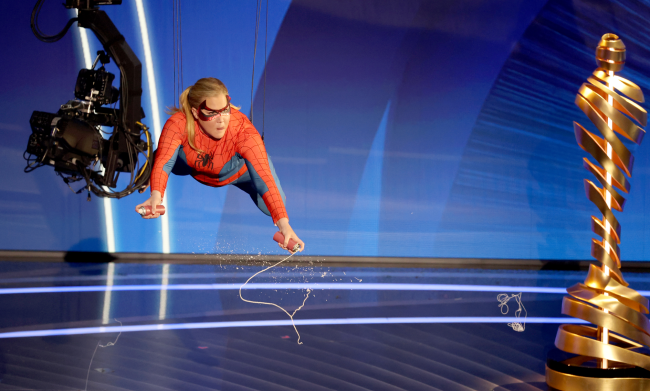 On Tuesday, Jim Carrey called out Hollywood for being “spineless” for giving Will Smith an ovation for winning after he assaulted Chris Rock on stage at the Oscars.

Late Tuesday night, one of the hosts of this year’s Academy Awards, “comedian” Amy Schumer was reinforcing Carrey’s statement with a statement of her own on social media addressing the Will Smith slap.

“I think we can all agree that the best way to unpack what happened is to stream my series @lifeandbethhulu and see me on tour this fall,” Schumer joked, I think. “But for real. Still triggered and traumatized.”

Related: Joe Rogan Blasts Will Smith: ‘You Just Pulled Your Pants Down And Took A Sh-t On The Dinner Table’

“I love my friend @chrisrock and believe he handled it like a pro,” Schumer continued. “Stayed up there and gave an Oscar to his friend @questlove and the whole thing was so disturbing.

“So much pain in @willsmith anyway I’m still in shock and stunned and sad. Im [sic] proud of myself and my cohosts. But yeah. Waiting for this sickening feeling to go away from what we all witnessed.”

Schumer was apparently to hide her “trauma” very well Sunday night when she joked after the attack, “I’ve been getting out of the Spider-Man costume. Did I miss anything? There’s, like, a different vibe in here. Probably not. Well, anyway!” then proceeded to call Best Supporting Actress nominee Kirsten Dunst a “seat filler.”

Related: Chris Rock Apology Was Fake, Comedian Not Interested In Public Truce With Will Smith: Report

Needless to say, Schumer immediately began getting dragged on the internet for claiming to still be “triggered and traumatized” and “still in shock and stunned” two full days since Will Smith smacked Chris Rock in the face at the Oscars.

Amy Shumer: 🤔“How can I turn Chris Rock’s moment into something that reflects back onto me?”

Amy Schumer: “Oh, I’m so traumatized. I feel sick over it. When will my life ever return to normal? Hey people, feel sorry for me. Look at ME!”🙃 https://t.co/JPEzr5Kavw

Yet she didn’t speak about Jada and how SHE feels being mocked of her autoimmune disease at all. Stop centering yourself this isn’t about you

She should also be traumatized by what she did to Kirsten Dunst.

The only traumatising event at the Oscars were Amy Schumer’s attempts at comedy.

Did she feel traumatized after she was accused of stealing other comedians jokes 😒 https://t.co/bbovBWVIbN pic.twitter.com/mA8xYtaJur

Let's make it about you, Amy.

Nobody was triggered enough to stop the ceremony and have Will Smith removed, even to a back stage area to calm down. The whole thing just carried on as if nothing had happened.

Imagine if she saw something really traumatizing

Is there anyone worse than @amyschumer? “Triggered and Traumatized” https://t.co/T7ERkmZEx2

UPDATE: Apparently Wanda Sykes was also “traumatized” by the slap.