Joe Rogan Blasts Will Smith: ‘You Just Pulled Your Pants Down And Took A Sh-t On The Dinner Table’ 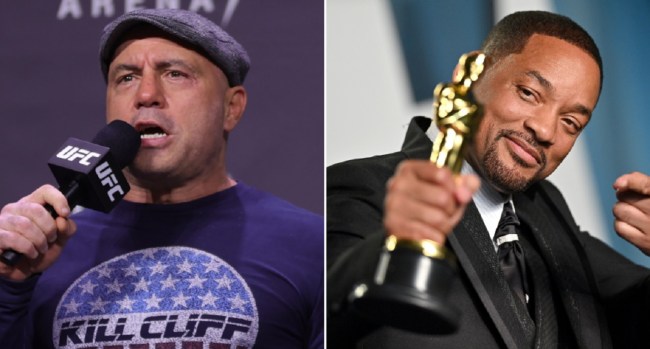 Joe Rogan is not happy with Will Smith’s actions on Sunday night.

Rogan addressed the situation on the latest episode of the JRE podcast and blasted Smith for setting a terrible precedent after he slapped Rock over a “mild joke.”

Will Smith slapping Chris Rock "sets a terrible precedent for comedy clubs. Like, are people going to decide that they're going to go on stage and smack a comedian now?" asked @joerogan. https://t.co/DkM6aATXdA pic.twitter.com/jAtUWOG7Rj

“I don’t necessarily think people are going to change their behavior but dumb people might,” he said. “But also it’s like what are we saying as a society when the people that we look up to, for whatever reason, for good or for bad, we look up to actors. And the Academy Awards is supposed to be them in their most regal- their most regal outfits, their best behavior and to drop down to violence for something so innocuous as a G.I. Jane joke.”

Rogan was particularly bothered that Smith was allowed to stay in the theater after creating an awkward situation.

“And then sit there quivering, saying ‘Keep my wife’s name out of your fuckin’ mouth’, and everybody’s just gotta sit there in the shit that you just took on the table.

You just pulled your pants down and took a shit on the dinner table, and they all have to just sit there and look at that. That’s what it’s like. The whole idea behind it is completely irrational.

But what I’m saying is like, these people live in this fake world of, you know, you’re protected by guards, you’re driven by limos, you’re on the red carpet, like all of it is crazy life.

And he’s so God damn famous, and so removed from regular discourse and interaction with regular people, that he, for whatever reason in his head, acted like he’s a character in a movie.”

It’s safe to say that Rogan won’t be inviting Smith on the JRE podcast anytime soon.