Amy Schumer Unsurprisingly Has The Most Annoying Take On The Will Smith Slap, Blames ‘Toxic Masculinity’ 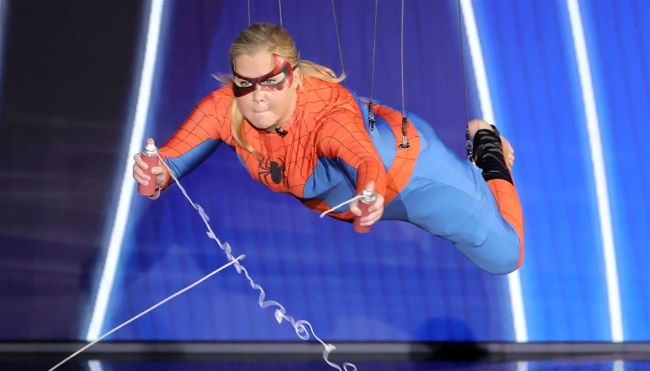 Appearing at her comedy show at Las Vegas’ Mirage Theater on Saturday, comedian Amy Schumer — who co-hosted the 2022 Academy Awards alongside Regina Hall and Wanda Sykes — shared her perspective on the infamous Will Smith slap and, perhaps unsurprisingly, had a terrible take on the incident.

Schumer, who called Smith smacking Chris Rock “really upsetting”, blamed the moment on “toxic masculinity,” as if smacking someone in front of hundreds of people while wearing a tuxedo is something men often do when they’re angry.

Amy Schumer’s thoughts on the Will Smith slap

“It was just a f—ing bummer,” Schumer reportedly said at the top of her act. “All I can say is that it was really sad, and I think it says so much about toxic masculinity. It was really upsetting.”

In addition to her comments about Smith, Schumer also revealed what jokes she was prevented was saying on the broadcast, claiming that her lawyer advised against saying them on TV. Schumer said she had jokes prepared about Joe Rogan, James Franco, and Alec Baldwin, which she shared with the audience:

“Don’t Look Up is the name of a movie? More like don’t look down the barrel of Alec Baldwin’s shotgun,” she said. “I wasn’t allowed to say any of that [at the Oscars], but you can just come up and [slap] someone.”

Honestly, for the life of me, I have zero clue what the connection between Don’t Look Up and Alec Baldwin is. Make fun of them both all you want, sure, but at least make it make sense.