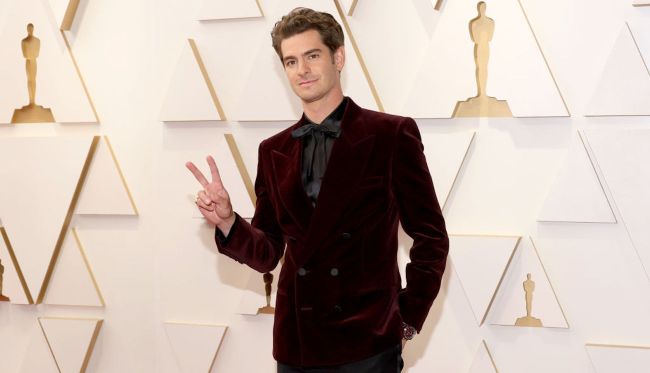 Even someone like Martin Scorsese — arguably the most influential American filmmaker of the last 50 years — can have underrated and underseen films, which is exactly the case when it comes to his 2016 historical epic Silence.

Case in point? I’ve personally never seen it, so I’m not going to sit here and preach about how you simply *must* see it, because that would be hypocritical. Although, for what it’s worth, the general consensus seems to be that it’s an excellent movie.

Perhaps more people will seek out the film now that it’s made its way back into headlines thanks to Andrew Garfield, who starred in the film alongside Adam Driver and Liam Neeson.

During a recent interview on WTF with Marc Maron, Garfield detailed  the “trippy experiences” he had while “starving himself” of sex and food for six months while preparing for his role as a 17th-century Jesuit priest.

“You end up in a pretty deep space. It’s a transformational process. I was celibate for six months … and fasting a lot. I had some pretty wild, trippy experiences from starving myself of sex and food for that period of time,” Garfield said on WTF with Marc Maron on his preparation for Martin Scorsese’s Silence.

“It’s not about being an a**hole to everyone on set. It’s actually just about living truthfully under imagined circumstances, and being really nice to the crew simultaneously, and being a normal human being, and being able to drop it when you need to and staying in it when you want to stay in it.”

Given the nature of Garfield’s comments, the internet had naturally a field day with them:

Spider-Man doesn’t eat or fuck, we know this.

props to andrew garfield for inhabiting that character the way he was written 🙏🏻 https://t.co/hxtfo8QV1n

girl we goin to islam? https://t.co/awxq1EI3CW

I did that when I was 21 because of Job Seekers Allowance https://t.co/L5UzgF4ddl

“My dear boy, have you tried acting?” –Laurence Olivier https://t.co/wzTQZ3NbZu

I did this too, but it was called ‘being in an indie band.’ https://t.co/UPaW6Y9Okv

I too am starving myself if sex. https://t.co/9AHwYbOHFD

Sometimes it's good to remember that in the '30s and '40s actors would just read lines from the script and pretend… Choices https://t.co/Qbm5cfrvTd

Reminds me of the Chris Rock line about David Blaine: "What’s his last trick? 'I’m in a box… and I ain’t gonna eat.’ … That ain’t no trick, that’s called living in the projects." https://t.co/po4kNaSgby

Garfield going all La Motta and dumping a pitcher of ice water down his drawers. Emma Stone unamused. https://t.co/K9LZAx99Ct

If you do find yourself in the mood to watch Silence, it can be streamed over on Paramount+ and rented virtually anywhere else for about $3.