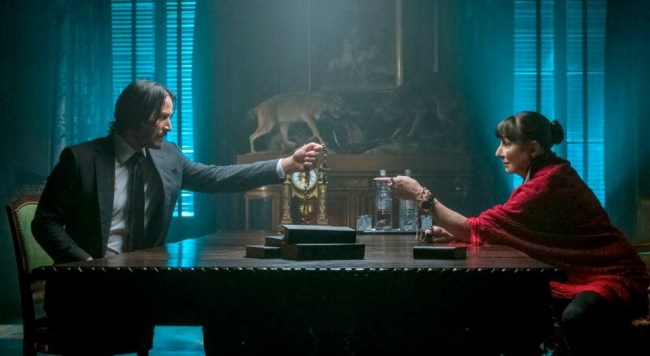 John Wick: Chapter 3 – Parabellum flies into theaters on May 17, 2019, and all of the stars of the upcoming shoot’em flick up are feverishly promoting the movie. Anjelica Huston, who hasn’t really appeared in any Hollywood blockbusters of late, turns 68-years-old in July and she is going out with a bang by spilling the tea on Hollywood actors. Huston did all that she could to promote John Wick 3 by dishing some dirt on fellow actors including Jack Nicholson, Bill Murray, Robert De Niro, Al Pacino, Oprah Winfrey and Diane Keaton.

In an interview with Vulture, Huston showed that she DGAF and went hard after several celebrities. Huston starred in 2014’s The Life Aquatic with Steve Zissou with Bill Murray, who she said was “full of sh*t.”

Anjelica said she was “really hurt” when Murray invited the entire cast to dinner during the first week of filming. Everyone except for her. Huston said the cast were all staying at this little hotel and when everyone came down for dinner, they “were a little dog-faced about my not being invited.” “They were all like, ‘Oh, you know, we don’t really want to go.’ That was worse than anything.”

Huston said she ran into Murray in Florence, Italy after filming the movie and he said, “Hey, how’ve you been? I missed you.” Huston replied, “You’re full of shit. You didn’t miss me.” Huston said the two have mended their disagreements and Murray showed up to her husband’s funeral. “He couldn’t have been nicer that day,” Anjelica said. “He showed up. A lot of people didn’t.”

In 1986, Anjelica won the Academy Award for Best Actress in a Supporting Role for her performance in Prizzi’s Honor, a gangster dramedy directed by her father John Huston. Anjelica edged out Oprah Winfrey who was up for the Oscar for her performance in The Color Purple, which was nominated for 11 Academy Awards. Huston contends that ever since she beat Oprah that she cut her off and ignited a feud.

Huston claims that after beating Oprah, she didn’t invite her on The Oprah Winfrey Show. “She never had me on her show, ever,” the The Addams Family actress said. “She won’t talk to me. The only encounter I’ve had with Oprah was when I was at a party for the Academy Awards, a private residence. I was talking to Clint Eastwood, and she literally came between us with her back to me. So all of the sudden I was confronted with the back of Oprah’s head.”

“Nobody else would dislike me so much as to literally, physically come in between the person I was talking with that way,” she added. “But I admire Oprah. God knows, she’s made some big steps.”

Huston also took a shot at Diane Keaton. Anjelica said that she is only interested in movies “that aren’t apologetically humble or humiliating, like ‘Band of cheerleaders gets back together for one last hurrah.’” That’s exactly the plot of Keaton’s movie Poms, which opens next week and is about a band of cheerleaders.

“If I’m going to be an old lady — and I’m sort of touching old lady these days — at least I want to be a special old lady,” Anjelica said. “I don’t want to be relegated to some has-been making a comeback. I hate comebacks.”

Speaking of comebacks, Huston was not afraid to go hard after Robert De Niro and Al Pacino for their choice in sh*tty roles. Huston agreed that older actors keep doing substandard movies because they need the money. “Although, how big can his nut be? I guess he has maybe a couple of ex-wives, right? Not many, but what does this fellow spend his money on? He’s got Nobu. He’s got the Tribeca Film Festival — he’s not spending the film money on that,” Houston said of Robert De Niro doing garbage movies like Meet the Fockers.

“Pacino does some schlock. But in some way he’s forgiven, because he always goes out on a limb and does Salomé all by himself,” Huston says. “Pacino is more experimental, I think. But Bobby, I don’t know the last thing that I’ve seen him in that I thought, Wow, he’s really cracking it.” Does Anjelica Huston have a kill list like Arya Stark but it is fellow actors who have betrayed her?

Huston dated Jack Nicholson on and off for over a decade starting in 1973 when she was 22-years-old. Nicholson’s former girlfriend talked about Jack’s cocaine habit. “Never took overt amounts. He was never a guzzler. I think Jack sort of used it, probably like Freud did, in a rather smart way,” Huston said. “Jack always had a bit of a problem with physical lethargy. He was tired, and I think probably, at a certain age, a little bump would cheer him up. Like espresso.” Just like espresso.

Vulture‘s Andrew Goldman told Huston: “I remember reading that Jack Nicholson supposedly had what he called upstairs and downstairs cocaine. Downstairs was good enough for guests, but upstairs was the good stuff for him and his intimates.”

Huston replied, “I don’t know that that’s a true story. But there was a type of cocaine in the ’70s that I would’ve classified as upstairs cocaine — pharmaceutical flake — that was kind of effervescent, not that it was fizzy, but it was light and uncut.”

Anjelica then explained the difference between “good cocaine” and “bad cocaine.” “Bad cocaine makes you feel shitty. Probably makes you run for the loo because it’s laced with laxatives,” Anjelica said. “Pure cocaine gives you a very light, airy, clear, and extremely pleasant feeling. But really, there’s no such thing as good cocaine. I don’t believe that people should take it recreationally.”

Huston said she still smokes weed to this day but doesn’t like edible because they’re “too slow and you don’t know where it’s going.” Who knew Anjelica Huston was such a firecracker.