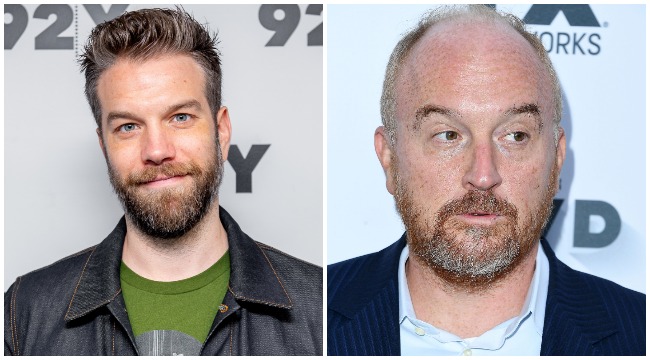 Stealing jokes in comedy is as taboo as bringing stinky leftover fish to work everyday and putting it in the communal fridge. Eventually, you’re going to get called out. Joe Rogan made this very clear when he nearly murdered Carlos Mencia onstage for allegedly stealing jokes from lesser-known comics.

Since then, Dane Cook, Amy Schumer, Trevor Noah, and many others have allegedly cheated off someone else’s paper. Anthony Jeselnik has now added one of comedy’s biggest names to that list: Louis CK.

During a Q&A at the 92nd Street Y this week, one-liner specialist Jeselnik said that “years ago” Louis had watched his show at the Comedy Cellar from the wings, and when Jeselnik came offstage, CK said to him, “I love watching you because I try to guess your punchline, and I come up with my own that works, but it’s different from yours.”

Jeselnik said that Louis — who was due onstage next — then asked him if it would be OK if he tried some of his own punchlines to Jeselnik’s setups on the same crowd for fun. Jeselnik said he told Louis it would “be an honor” but he never expected CK — who is trying to make a comeback following the scandal over his sexual misconduct — to keep using his material.

Jeselnik added, “I see him six months later at the Aspen Comedy Festival — and he’s doing the f - - king jokes!”

This is very ironic, seeing as Louis CK remained largely silent in 2006 when comedy fans accused Cook of stealing three of Louis’ jokes. After the dust settled, the two sat down on an episode of Louie and sparred about the incident.

As if Louis needed any more bad press.