Antonio Brown Challenges Logan Paul To A Fight, Paul Responds With Epic Burn About The Patriots 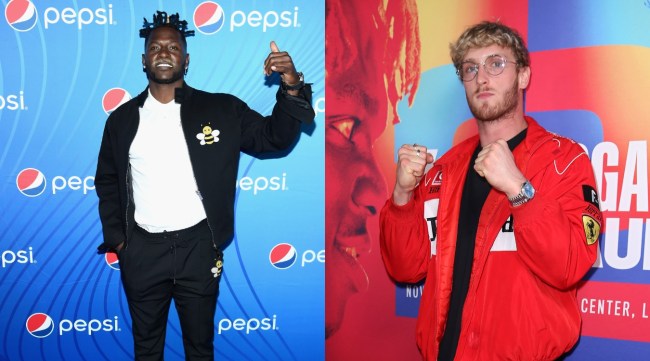 Oh man, people, we need this. What better way to deal with two of America’s most annoying and useless “celebrities” than tossing them in a ring and having them beat each other up? Talk about killing two birds with one stone.

Hilariously enough, Brown — who is a former professional football player — would be a massive underdog in a potential fight between these two ass clowns, as Odds Shark currently has Paul favored at -2000, with Brown’s odds clocking in at +1000.

Opening odds for a potential boxing match between @LoganPaul and @AB84 (BetOnline):

The 24-year-old Paul already has a brief history in amateur boxing, as he took on Olajide William Olatunji, a.k.a KSI, in a boxing match at the Staples Center in Los Angeles back in November. Paul ultimately lost by decision.

Nevertheless, Paul is obviously feeling confident about his chances in a fight against AB, as he tweeted at the former Pro Bowl wideout that he would “drop him faster than the Patriots.” Boom, roasted.

While you may be saying to yourself, “but Eric, the more attention we give these guys, the worse they become, right?” And while you have a fair point, I’d argue that watching both of these human hemorrhoids get bludgeoned for a half-hour is a net win for society.

I’ll tell you what, though, between this and his recently released rap song, it appears that AB has finally accepted that his NFL career is over.