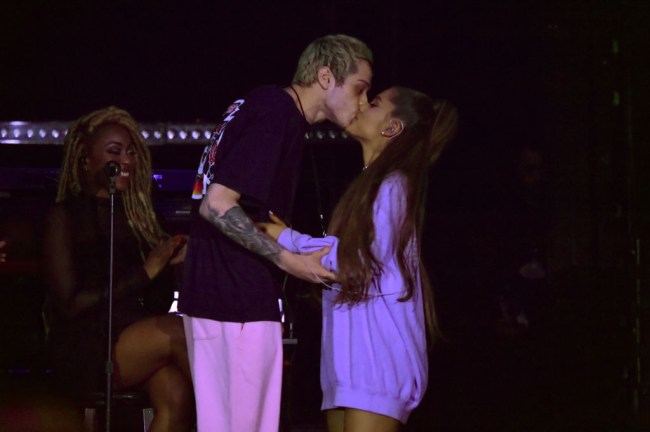 Against all odds, we wanted to believe that an engagement of mid-20’s celebrities after just two months of dating would go the distance. No one wanted us to believe more than the couple themselves. Pete and Ariana inked 13 tattoos on their bodies to commemorate their now defunct love. Ariana Grande released a song titled “Pete Davidson” on her new album in which she called him her “soulmate”. Davidson sounded like an eighth grade girl passing notes to his crush when he appeared in interviews. Now, it’s just another love lost.

TMZ reported that Ariana Grande was “quick to fork over” the $93,000 engagement ring Davidson purchased for her back in June, complete with a 3.03 carat diamond set in platinum.

As far as the couple’s pig they adopted last month and named “Piggy Smallz,” Grande will take sole custody of the porker, despite Davidson getting a tattoo of Smallz on his torso shortly after the adoption.

The 25-year-old Grande ended the engagement following the drug-related death of ex-boyfriend Mac Miller, who a source told PEOPLE, “He was such a special person to her. She is very, very sad. … This is a nightmare for her.”

Just two weeks ago on the September 29th episode of Saturday Night Live, Davidson joked about the absurdity of the couple ever breaking up.

“God forbid we split up and she takes half my sneakers,” Davidson joked on SNL about getting a prenup. “If we break up, and we won’t — we will — but we won’t,” he joked, “but like in 10 years if, god forbid that ever happened, there will be a song called ‘Pete Davidson’ playing in speakers at Kmart and I’ll be working there.”