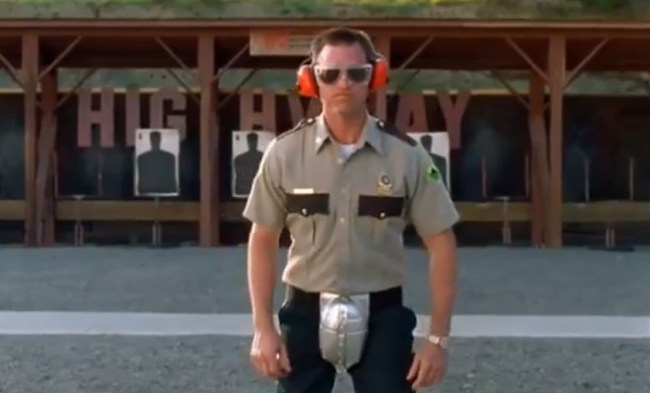 What sounds like a classic “Florida Man” story, comes to us from the great state of Alabama. Two men from Arkansas took turns shooting each other while wearing bulletproof vests. As if this wasn’t already a bad idea, the two duelers were consuming alcohol.

Charles Ferris, 50, and Christopher Hicks, 36, had been drinking when they decided to test the integrity of bulletproof vests. What better way than to shoot each other in a Southern version of Russian roulette. This is like one of those team-building exercises to show trust in your co-worker.

Ferris instructed Hicks to shoot him in the chest because that’s what friends do. Hicks obliged and shot Ferris. He was “pissed” about the pain and said it was only fair that Hicks get shot with the vest that had already been compromised. Being the good sport, Hicks agreed. He shot him in the chest with a .22 caliber semi-automatic rifle. That’ll leave a mark.

According to the affidavit, Ferris didn’t just get even, he “unloaded the clip into Christopher’s back.” Talk about “hold my beer.” Five bullets hit the vest. Both gentlemen were hurting from being shot at while wearing vests. The wife of Ferris, the voice of reason, convinced Charles to go to the hospital. Hicks also went to the hospital and complained of chest pains.

Shooting people with guns is frowned upon, so Ferris devised an extraordinary lie. When the Benton County Sheriff’s Office interrogated Ferris, he explained that he was working as a mercenary and was hired to protect an “asset” and being paid $200. While guarding his “asset,” a gunfight broke out in the woods of Alabama. Thankfully, Ferris had on his vest and was able to escape with the “asset.”

Amazing story! Totally believable. Except that the wife of Ferris showed up at the hospital and told cops that the two fellas were plastered and shooting each other while wearing a bulletproof vest. Women ruin all of the drunk fun.

Two Guys Got Drunk On A Back Porch, Took Turns Shooting Each Other With Bulletproof Vests On, Get Arrested: Chillin’ on the back porch in Arkansas. Two guys, Christopher Hicks, 36, and Charles Eugene Ferris, 50, were arrested on aggravated assault… https://t.co/aHBNx7G2ps #Life pic.twitter.com/OG2mkkCEZ1

In a classic “I’m sorry, I thought this was America” moment, police arrested Hicks and Ferris on March 31st. They were both charged with aggravated assault, a Class D felony. If they are found guilty they face a maximum punishment of six years in prison and a possible fine of $10,000. Is it really aggravated assault if they consented?

There is something called the Ballmer Peak, which was popularized by Microsoft CEO Steve Ballmer. The theory states that there is a peak of productivity when it comes to computer programmers when they have a blood alcohol concentration percentage between 0.129% and 0.138%. However, it quickly plummets once too much alcohol has been consumed.

One could argue that the same is true in other aspects such as playing beer pong, blogging, and shooting guns. So at some point of drinking, a person’s hand-eye coordination falls considerably after too many drinks. So shooting at each other while drinking seems like a really, really bad idea since they could easily miss the vest and hit them in the face or even worse, the nads. Get you a friend who will let you shoot them.