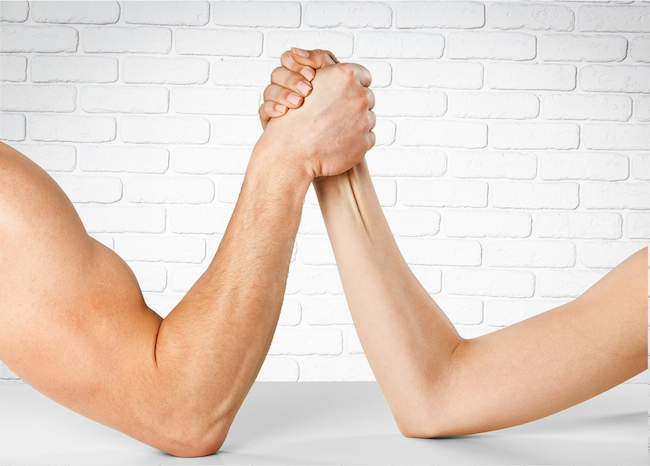 Yesterday afternoon, I beat my son in a game of street soccer. He led for most of the match-up but I rallied back for the 10-8 win.

Eventually, he’s going to beat me at soccer and a hundred other sports and I’ll be man enough to admit defeat. I won’t act a fool like this dad in Kentucky who opened fire on his kid after getting his ass handed to him in arm wrestling.

According to the Boone County Sheriff’s Department in Kentucky, Curtis Zimmerman, 55, was drunk when he challenged his juvenile son to an arm-wrestling contest.

Zimmerman lost to his son several times, starting mouthing off to the kid, and as his son walked away from the situation his old man grabbed a firearm.

Deputies learned that Zimmerman was intoxicated and challenged his juvenile son to an arm-wrestling contest. When Zimmerman lost multiple times, he became agitated which led to a physical altercation with his son.

Zimmerman grabbed a firearm and as his son was going upstairs, Zimmerman fired two (2) shots inside of the house. Zimmerman stated that he fired the shots into the ceiling.

Zimmerman refused to comply with the police when they showed up at his house, resulting in an eight-hour standoff that ended at 8:30 in the morning.

During the standoff, only Zimmerman remained inside of the home. Zimmerman later surrendered without incident at approximately 8:25 AM this morning to members of the Boone County Sheriff’s Office SWAT Team and the Florence Police Department SWAT Team.

The Boone County Sheriff’s Office Hostage Negotiation Team spoke with Zimmerman throughout the morning and ultimately negotiated his safe surrender.

Thankfully, the two family members inside the house were able to get out unharmed.

Zimmerman was transported to a local hospital to be evaluated. After he’s medically released, he’ll face charges of first-degree wanton endangerment.

The Sheriff’s Office was sure to make clear in their Facebook post about the incident that, “Charges in a criminal complaint are accusations only. It is the government’s burden to prove the allegations beyond a reasonable doubt.”