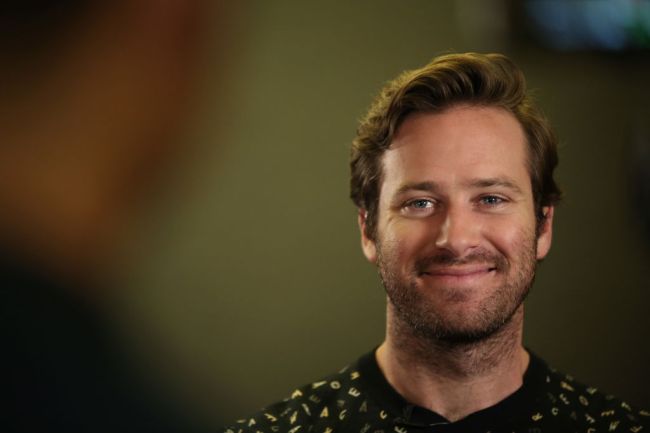 More disturbing accusations have been levied against Armie Hammer. An ex-girlfriend of the 34-year-old Hollywood actor claimed that Hammer carved a letter into her body with a knife, had numerous mannequins, and threatened to hurt a dog.

Paige Lorenze, a 22-year-old Instagram model, revealed some eye-opening details about her four-month relationship with Hammer. Paige told the Daily Mail and said that her time with Armie was “like a real life 50 Shades Of Grey without the love.”

“I had bad bruises all over me when we were together. I was left with marks from him using a paddle. I was his own real life Christian Grey fantasy,” Paige said. “There were teeth marks and bite marks all over me. He was completely obsessed with biting me. He told me ‘be proud as they were just love bites.’ Once he said, ‘If you did not tell me to stop I would eat a piece out of you.’ And he was serious too. It was like he actually wanted to eat my flesh away.”

Lorenze purports that Hammer owns a number of mannequins in the basement of his $5.8 million home in Los Angeles that he lived in with his estranged wife Elizabeth Chambers and his children.

“He told me that he had mannequins in his basement in his family home that Elizabeth and him were living at to practice rope tying on,” Lorenze told The Sun. “It creeped me out, honestly. It was really strange. I’d never even heard of anything like that before.”

Lorenze added to the Armie Hammer scandal, alleging that Hammer talked about wanting to strangle his dog.

“He would get angry at his dog and say like: ‘I’m going to kill this dog, I would have strangled him if you weren’t here,'” she said, adding that he actually wouldn’t hurt the Welsh Terrier named Archie.

Lorenze, who dated Hammer from October to December 2020, claimed that Hammer once used a sharp knife to carve a letter “A” into her flesh.

“He would love to do knife play, where he would wave the blade above me or glide it across my skin,” Paige alleged. “He was obsessed with it and usually he did not cut me. However that night he decided he wanted to brand me as his property and carve his name on my body. He tried to rationalize it as his gesture of his commitment to us being together for the long term.”

Lorenze attested, “I wasn’t sure he was serious, as he looked over my body and said, ‘Where should I carve an ‘A’ on you?’ Before I could process it, he plunged the tip of the knife into my flesh just above my vagina.”

“The pain was excruciating, but I did not want to seem weak, despite the discomfort,” Paige alleged. “I froze as he smiled at his work. He then said the cut was not deep enough, even though it was about an inch – the whole tip of the blade. He said he wanted to collect a kitchen knife to make it bigger, but then as it bled, he started licking it. This continued for a few minutes. And I kind of blanked it all out. I was concerned that the wound was going to get infected. I had to clean it and put a bandaid on afterwards.”

As reported by DListed, the model told Star Magazine: “He said he wanted to find a doctor that would remove my ribs. He was telling me you can remove the bottom ribs so he could smoke them, cook them and eat them. He kept saying ‘You don’t need them.'”

Another one of Hammer’s ex-girlfriend, Courtney Vucekovich, also claims the actor would fantasize about barbecuing her body parts.

“He said to me he wants to break my rib and barbecue and eat it,” Vucekovich told Page Six. “He likes the idea of skin in his teeth.”

According to a Variety report, Hammer sent alleged messages about “graphic sexual fantasies, going as far as cannibalism, with the actor appearing to write to a woman on the app that he is ‘100% a cannibal’ and desired to ‘drink your blood.’”

The Royal Cayman Islands Police Service (RCIPS) investigated Hammer over his alleged “secret account” that flaunted a woman dressed in lingerie, who he identified as “Miss Cayman.”

Lorenze told DailyMailTV, “I want Armie to address his demons, see the pain and trauma that he has caused me and other women. But any man who is fantasizing about crushing bones, eating them, having sex with female limp bodies is a danger to all women.”

“These assertions about Mr. Hammer are patently untrue. Any interactions with this person, or any partner of his, were completely consensual in that they were fully discussed, agreed upon, and mutually participatory,” the lawyer said.

“I’m not responding to these bullsh*t claims but in light of the vicious and spurious online attacks against me, I cannot in good conscience now leave my children for 4 months to shoot a film in the Dominican Republic,” he stated. “Lionsgate is supporting me in this and I’m grateful to them for that.”