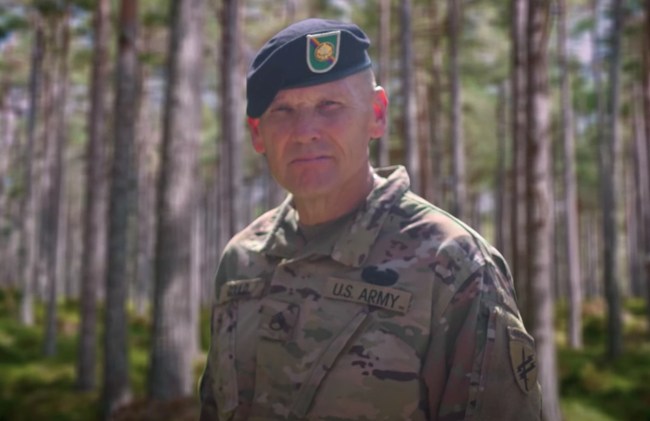 At 59-years-old, Monte Gould became the oldest person to ever complete the Army‘s basic combat training. He recently sat down to share his story of how he became the unlikely record holder of this title.

This wasn’t Monte’s first time serving in the military. In 1978, he enlisted in the United States Marine Corps for three years. After his 3-years he went into law enforcement in Los Angeles until Operation Desert Storm broke out in the early 90s and he went back into the military. He’d been deployed to Afghanistan, Kuwait, and Asia. And he joined the National Guard until 2009 when he exited service again.

Flash forward to recent times and he wanted to re-enlist for 4 different reasons. The first reason is his son’s a member of the Army Reserves near his home and he wanted to serve alongside his son, an opportunity few ever have. The second reason was very practical, he needed to complete about two more years to fulfill his retirement requirements from the US Army and get that retirement money.

His third reason was he wanted to serve his nation and thought he had more to give and the fourth and final reason was he felt that he was physically fit and healthy enough to do anything that anyone else could do. Monte Gould believed he could serve his nation in a productive way as well as anyone. So he went through the process of re-enlisting which took ‘packets and hundreds of pieces of paper’ submitted over a span of 14 months all to find out that he had to go through Army’s Basic Training again. Here’s his story:

To any veterans and active-duty military readers out there, I’d like to say thank you for your service and extend my gratitude to you on this Veteran’s Day.

If you gentlemen enjoyed this video of Monte Gould’s story, it’s part of AARP‘s ‘Battlefield Heroes’ series which is running on their YouTube channel. This is the second episode. The first video aired a few months ago and tells the story of Iraq War veteran Staff Sgt. Rodney Ridgeway who enlisted in the Army after the 9/11 attacks. If you’re interested, you can watch that video here.