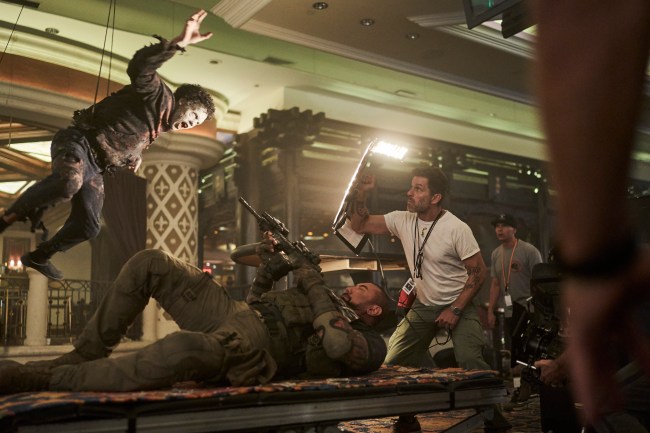 Army of the Dead is a zombie movie set in Las Vegas directed by Zack Snyder — that description alone should pretty much sum the experience up. Zombies. Vegas. Snyder.

Like most of Snyder’s films, it’s about 20 minutes too long, but honestly, that doesn’t matter when you’re having so much fun. The world-building is intriguing and the evolution of the zombie genre is fitting. The cast is not only excellent but often hilarious, and the set pieces are gripping in every sense of the word — they’re well-choreographed, perfectly paced, and absolutely gnarly: there’s one character death that had my roommates and I literally standing on top of the couch screaming in (shocked) excitement. Long story short: Army of the Dead represents Zack Snyder at the absolute peak of his Zack Snyder-ness, meaning if you’ve enjoyed his work in the past, you’re guaranteed to love Army of the Dead (which also represents his most *fun* movie in over a decade, if not the most fun film of his career so far).

To pontificate about Army of the Dead any further would be an exercise in futility, as trying to read about a zombie movie is like trying to watch music: you’re using the completely wrong sense and are doing yourself a disservice in the process. The less knowledge you head into the film with, the better, as it’ll allow you to experience all of the pattened Snyder twists and turns for yourself.

Go see this movie — Army of the Dead hits theaters on May 14 before hitting Netflix on May 21 — and see it on as large of a screen as you can, with as many people as you can. Movies are meant to be enjoyed and that is *exactly* what Zack Snyder’s Army of the Dead provides: enjoyment. The end.