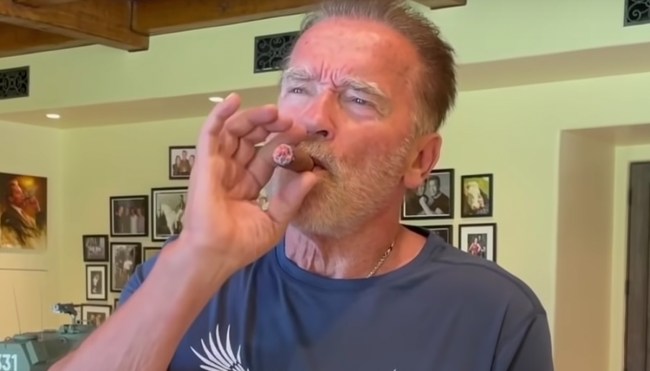 Based on the results of the search I just conducted to (once again) figure out how to correctly spell Arnold Schwarzenegger’s last name, Google would appear to believe he’s best known for being the “Former Governor of California” as opposed to the bodybuilder who won the Mr. Olympia contest seven times or the actor who leveraged those massive muscles to absolutely dominate the box office in the 1980s and early ’90s.

Based on the impressive list of accomplishments he’s racked up over the course of his life, Schwarzenegger has had plenty of excuses to spark up one of his beloved cigars. However, based on how often he’s spotted with a stogie in his hand, he’s not the kind of guy who needs a reason to unwind with the Cohibas he lights up on a daily basis.

The Governator is also known for smoking cigars on movie sets the same way Snoop Dogg smokes weed—a fact that Danny DeVito took full advantage of when he laced one of his co-star’s treats with some wacky tobaccy on the set of Twins (a favor Arnold returned when they recently reunited).

It would appear Schwarzenegger had a more pleasant experience when he laced a cigar with a different mind-altering substance while filming Total Recall, as the actor recently shared a technique involving tequila he picked up while he was shooting the movie in Mexico City with Cigar Aficionado.

The actor says he was having dinner at a high-end restaurant where he plucked a cigar out of the humidor only to have it plucked out of his hand by a catador who insisted on “spicing it up.” If you don’t have three minutes to devote to the guide, here’s a breakdown of the tequila cigar hack Schwarzenegger has been deploying since 1989.

How To Infuse A Cigar With Tequila

As he notes, the type of cigar you use doesn’t really matter, as the process transforms it into a unique “tequila cigar” regardless of where the tobacco was sourced. With that said, you’re probably not going to want to give this treatment to an ultra-premium brand, but hey, you do you.