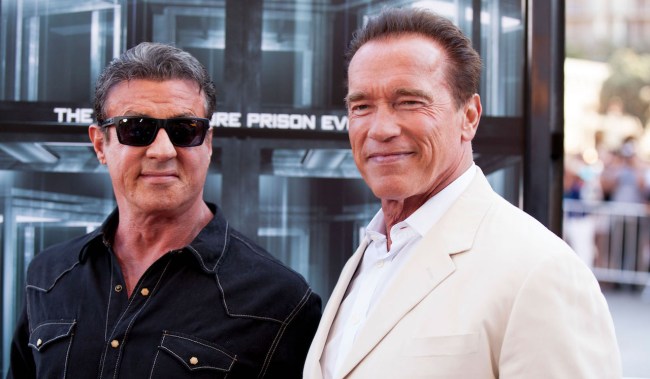 Back in the 1980s, there were arguably no two bigger movie stars in the country that Arnold Schwarzenegger and Sylvester Stallone.

Each massive action heroes at the peak of their powers, the two developed a friendly rivalry throughout the years and remain friends to this day.

However, just because the pair were friendly does not mean that they were always looking out for each other, as Arnold Schwarzenegger recently revealed that he once mindfucked Sylvester Stallone into taking a role, a role that has been considered among the worst in his career.

While appearing on Jimmy Kimmel Live!, the legendary action star and former governor of California revealed he once used mind games to convince Sly Stallone to star in a shitty a movie called Stop! Or My Mom Will Shoot.

“I read the script, and it was a piece of sh*t. Let’s be honest. I said to myself, ‘I’m not going to do this movie’. Then they went to Sly, and Sly called me, ‘have they ever talked to you about doing this movie?’. And I said ‘yes, I was thinking about doing it. This is a really brilliant idea, this movie’. When he heard that, because he was in competition, he said, ‘Whatever it takes, I’ll do the movie’. And of course the movie went major into the toilet.”

While Stop! Or My Mom Will Shoot was one of the biggest misfires of his career, Stallone would ultimately recover, as he starred in hits such as Demolition Man, Judge Dredd, and Cop Land in the following years.