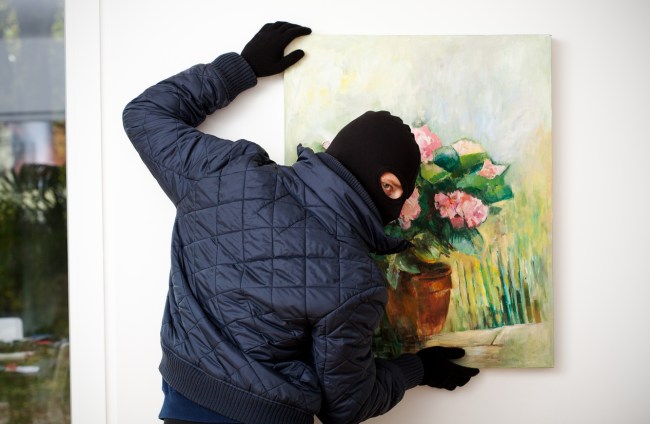 Okay, calling this man the world’s least intelligent art thief might be slightly hyperbolic, because surely there have been dumber. However, this man is pretty terrible.

Nearly a decade ago, in 2012, a group of thieves broke into Greece’s National Gallery in Athens. They stole Picasso’s 1939 painting “Woman’s Head” and Mondrian’s 1905 “Mill.”

Greek police have recovered two paintings by Picasso and Mondrian nine years after they were stolen from a gallery. Thieves raided the Athens National Gallery in 2012 and took Woman's Head (1939) by Pablo Picasso and Mill (1905) by Piet Mondrian.

The Picasso piece was personally donated to the country in recognition of Greece’s resistance to Nazi occupation during WWII. It features a hand-written inscription on the back reading, “For the Greek people, a tribute by Picasso.”

All of that goes to say that it’s a very easily recognizable piece. Thus, it cannot be sold or displayed anywhere without exposing the criminal.

As a result, the art thief was only able to hide the paintings in his home. He could not hang them, he could not share with friends, nothing. He had to keep them a secret, or he would run the risk of getting caught.

Well, that’s exactly what happened. Based on a tip, Greek authorities found the two artworks at a gorge in a rural city near Athens. The thief had recently hidden them there and must have told somebody. That knowledgable person must have tipped off the police.

Greek police recovered a stolen Picasso painting and dropped it while revealing it to the media https://t.co/DWtpwImJQm pic.twitter.com/ORrVEdMJu1

Doesn’t the thief know that loose lips sink ships? Had he just kept his mouth shut, nobody could have snitched and the 49-year-old house painter and construction worker wouldn’t have been caught.

Doomed from the beginning.

This wasn’t the only blunder amongst the heist. Apparently, the thieves botched the theft.

In addition to the Picasso and Mondrian pieces that were stolen, they tried to steal a 16th-century pen-and-ink sketch by Italian artist Guglielmo Caccia and a second Mondrian.

The suspect allegedly damaged the Caccia and flushed it down the toilet and dropped the second Mondrian as he tried to escape. Success rate of the mission was only 50%, so clearly it was not the brightest bunch.

At the end of the day, the thieves were able to escape with two highly-important pieces from the gallery. Some credit is due, though police at the time said security measures were basically “non-existent.”

I have never been involved with an art heist. Hand up, I will admit to having little knowledge in the area.

With that being said, I have seen National Treasure with Nick Cage. I feel like there needs to be a lot more planning that goes into stealing famous artwork from a famous museum.

The Greek thief got away with it at first, yes. But he did not profit off of the art, he did not get to share the art, nor did he get to pass it on to future generations.

Even if he had passed it down, the successors would not be able to profit or enjoy the work either. There was no purpose or end game and now he’s going to jail.