Astronomers May Have Found Our Next Home: Two ‘Nearby’ Earth-Sized Planets Discovered That Might Support Life 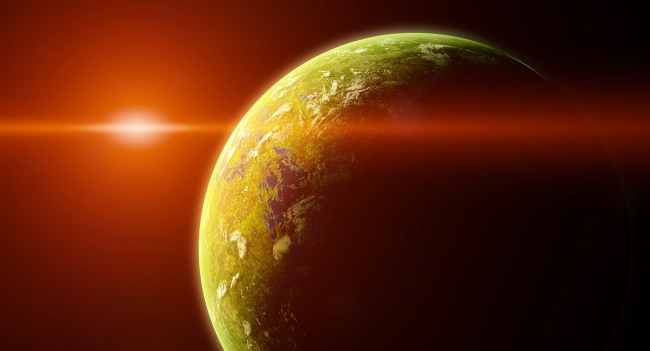 Since we seem to be using up our current home, Earth, at a rather alarming pace, astronomers and scientists have been hard at work looking for a new place that we humans can call home at some point in the (distant?) future.

The two planets orbit Teegarden’s star, the 24th closest star to the sun, a red dwarf star that was only just discovered in 2003. These two new potential exoplanets were spotted this month using an instrument called CARMENES (Calar Alto high-Resolution search for M dwarfs with Exoearths with Near-infrared and optical Échelle Spectrographs) during a survey being conducted for exoplanets.

Research on the planets and their sun, published in the journal Astronomy and Astrophysics, reveals Teegarden’s star seems to be stable, without large solar flares or other violent activity that could threaten the potential for life on the two promising candidates.

If the estimated orbit and rotation speeds are accurate, and there are no unexpected factors in the solar system to disrupt astronomers’ other calculations, Teegarden’s two planets could host rocky environments and flowing, puddling water. However, all of these assumptions are estimates, and not actually firsthand observations — for now. The Teegardan planet discoveries are part of a larger effort by astronomers to locate potentially life-supporting planets in order to refine observation and research technology, like high-powered telescopes, to learn even more about them.

The innermost planet Teegarden b has a 60% chance of having a temperate surface environment, that is temperatures between 0° to 50°C. Surface temperature should be closer to 28°C (2) assuming a similar terrestrial atmosphere but could be higher or lower depending on its composition.

Teegarden b is the planet with the highest Earth Similarity Index (ESI) discovered so far, which means that it has the closest mass and insolation to terrestrial values, albeit we only know its minimum mass (3). However, how this translates to habitability depends on many other factors, especially since this planet orbits a red dwarf star.

In the immortal words of one Lloyd Christmas, “So you’re telling me there’s a chance?”

Check out a simulated tour from our solar system to Teegarden’s star system created by the University of Göttingen and another video that goes further in depth on the discovery below.