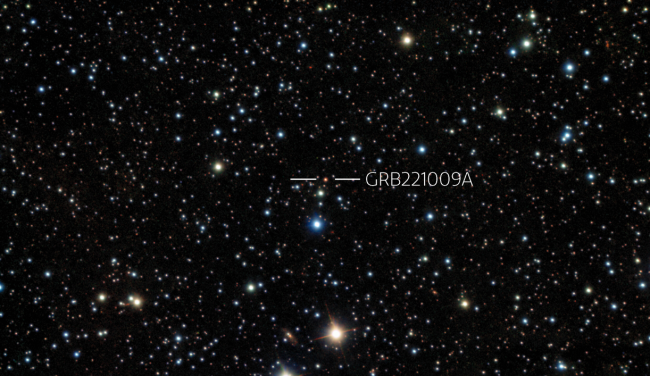 Astronomers recently reported seeing a gamma ray burst about 2.4 billion light years away from Earth which they believe is the most powerful explosion on record.

The explosion, named GRB 221009A, was witnessed by the Gemini South telescope in Chile and operated by the National Science Foundation’s NOIRLab.

Nicknamed “The BOAT” or the Brightest Of All Time, the gamma ray burst is believed to have occurred when a star exploded in a supernova (the death of a star), leaving behind a black hole.

A titanic cosmic explosion triggered a burst of activity from astronomers around the world as they raced to study the aftermath from what is one of the nearest and possibly the most-energetic gamma-ray burst (GRB) ever observed. Just-released observations by two independent teams using the Gemini South telescope in Chile — one of the twin telescopes of the International Gemini Observatory operated by NSF’s NOIRLab — targeted the bright, glowing remains of the explosion, which likely heralded a supernova giving birth to a black hole.

“The exceptionally long GRB 221009A is the brightest GRB ever recorded and its afterglow is smashing all records at all wavelengths,” said Brendan O’Connor, who led one of two independent teams of observers. “Because this burst is so bright and also nearby, we think this is a once-in-a-century opportunity to address some of the most fundamental questions regarding these explosions, from the formation of black holes to tests of dark matter models.”

The record-setting gamma ray burst was felt in Earth’s upper atmosphere from 2.4 billion light years away

The explosion was so massive that it even affected Earth’s atmosphere with Naval radio transmitters and detectors that search for high-energy photons both recording anomalies.

It was also so bright that all gamma-ray telescopes here on Earth see are completely white pixels with no detail, according to astronomer Andrew Levan.

“If you had gamma-ray eyes, you’d be blinded,” he said.

Jillian Rastinejad, who led the other independent teams of observers, said a GRB this bright is usually only seen once every thousand years or so.

“In our research group, we’ve been referring to this burst as the ‘BOAT’, or Brightest Of All Time, because when you look at the thousands of bursts gamma-ray telescopes have been detecting since the 1990s, this one stands apart,” said Rastinejad. “Gemini’s sensitivity and diverse instrument suite will help us to observe GRB221009A’s optical counterparts to much later times than most ground-based telescopes can observe. This will help us understand what made this gamma-ray burst so uniquely bright and energetic.”