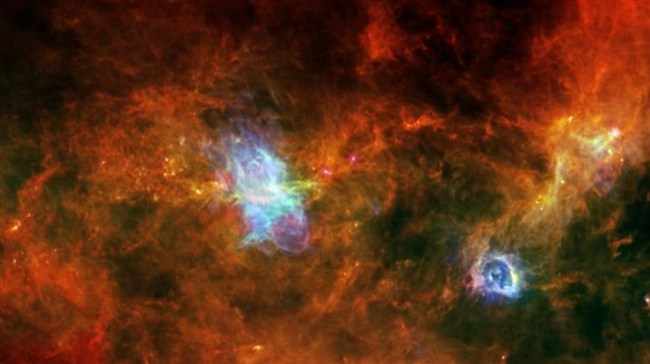 Unfortunate news for those of you who were hoping for an alien invasion to rescue us from the pandemic and election – there are no alien civilizations out there in space, according to a deep search by astronomers. Looks like you can stop practicing playing that five-note musical phrase from used to communicate with aliens in UFOs from Close Encounters of the Third Kind.

As part of a search for extraterrestrial intelligence (SETI), astronomers scanned the Southern sky for low radio frequencies. Scientists searched for alien life by utilizing the Murchison Widefield Array (MWA) in Australia, a collection of 4096 antennas planted in Western Australia that detect cosmic radio signals.

The SETI focused on the Vela region, which is approximately 800 million light-years away and home to at least 10 million stars as well as six known exoplanets. In addition, the team searched for aliens near 75 known exoplanets from two previous intergalactic surveys. The MWA SETI is believed to be the “deepest and widest survey for extraterrestrial intelligence yet,” according to Science Alert.

Chenoa Tremblay, one of the paper’s authors, explained that the Vela region is scientifically interesting because it features a high number of stars that have exploded and died, which creates ideal conditions for new stars to be born, according to CNET. The study was published in the Publications of the Astronomical Society of Australia on Monday.

The paper said astronomers used “the MWA in the frequency range 98–128 MHz over a 17-hour period, a field centered on the Vela Supernova Remnant was observed with a frequency resolution of 10 kHz.” The astronomers searched for “narrow-band signals consistent with radio transmissions from intelligent civilizations.”

In the vicinity of the Vela constellation, the SETI of the more than 10 million stars found zero “technosignatures,” which is evidence of alien technology.

“The MWA is a unique telescope, with an extraordinarily wide field-of-view that allows us to observe millions of stars simultaneously,” Tremblay stated. “We observed the sky around the constellation of Vela for 17 hours, looking more than 100 times broader and deeper than ever before. With this dataset, we found no technosignatures – no sign of intelligent life.”

Tremblay admitted that there are some flaws in the SETI. “Looking for technosignatures is assuming that the civilization have technology similar to our own,” says Tremblay. Aliens could very likely use advanced technology that we have no way of detecting, and perhaps they don’t want to be discovered. Technologically-advanced aliens are in their interdimensional transport ships laughing at humans using primitive radio signals.

“Since we can’t really assume how possible alien civilizations might utilize technology, we need to search in many different ways. Using radio telescopes, we can explore an eight-dimensional search space,” said the paper’s co-author Stephen Tingay. “Although there is a long way to go in the search for extraterrestrial intelligence, telescopes such as the MWA will continue to push the limits – we have to keep looking.”

The other issue with this SETI is that the universe is so unimaginably immense. “And even though this was a really big study, the amount of space we looked at was the equivalent of trying to find something in Earth’s oceans, but only searching a volume of water equivalent to a large backyard swimming pool,” the scientists concede.

Tremblay and Tingay are astronomers from the International Centre for Radio Astronomy Research (ICRAR), a joint research venture between Curtin University and The University of Western Australia.

Meanwhile, these super-advanced aliens are probably saying the same thing about us, “Hey Khaix’at, I scanned that nine-planet solar system and found no intelligent lifeforms.”