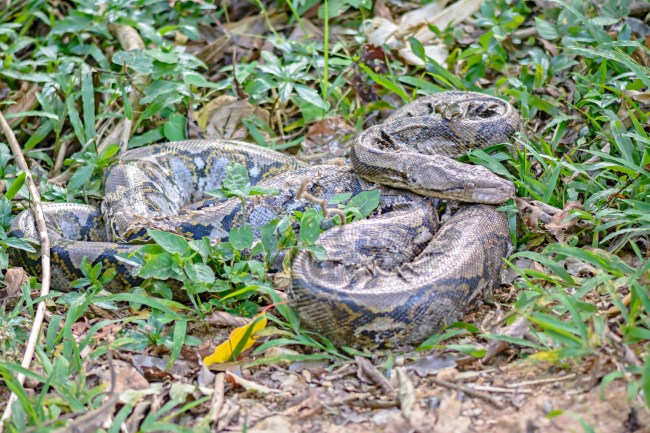 Puppies are better than snakes. This shouldn’t even have to be said because it’s a universal truth. Puppies bring millions of people joy while most snakes do what, they kill some frogs or whatever and lay eggs in your shed. It’s not even a contest.

This security camera footage from Australia shows a massive carpet python lurching out of the bushes to immediately immobilize a puppy. The python is a constrictor and would’ve drained the life out of that adorable little puppy within a few minutes if the owner didn’t intervene but thankfully they were there and saved the dog’s life.

If there’s any humor to be found here it’s that the owner’s first instinct was to beat the snake with a cardboard roll from inside of wrapping paper as if that was going to force the snake to lose its grip. We used to beat the crap out of each other with those as kids and they barely hurt. What the heck would a snake care about getting beaten with floppy cardboard?!

The owner quickly realized it was going to take them grabbing the large snake and unraveling it from the puppy before things got serious. Thankfully, the Aussie woman was able to save the day and the puppy made it out of there safely. Here’s the security camera footage which captured the incident:

Here’s the description from the YouTube video. The puppy’s doing fine and escaped with only minor injuries:

Puppy Jasper was lucky to escape an attack from a carpet python in our backyard today. The almost 9-week-old pup had taken himself out to go to the toilet and then had a little play in the garden before he was attacked by a snake sitting under the chilli bush. It quickly wrapped around him and his puppy cries alerted us to his trouble.
It was a confronting scene to find the snake completely wrapped around Jasper as he yelped for help. In that first moment we used a cardboard Xmas wrap roll to try and knock the snake off him but quickly realised it was useless and we would need to pull the snake off by hand. The carpet python was reluctant to let the puppy go and the security vision shows how quickly it immobilized our active pup.
Thankfully Jasper received only minimal injuries and hopefully this incident reminds others to keep a close eye on their pets.

According to For The Win, the puppy made it out of there with just a bite on its left ear and a slightly bruised lung which it will quickly recover from.

I can’t help but imagine how traumatizing this footage would’ve been for that family if the puppy didn’t make it out of there safely. Say, for instance, the snake dragged the puppy away and they couldn’t find it so they went to the security footage and then had to witness that nightmarish scenario unfold. That would’ve been absolutely devastating. Thankfully, this story had a happy ending.