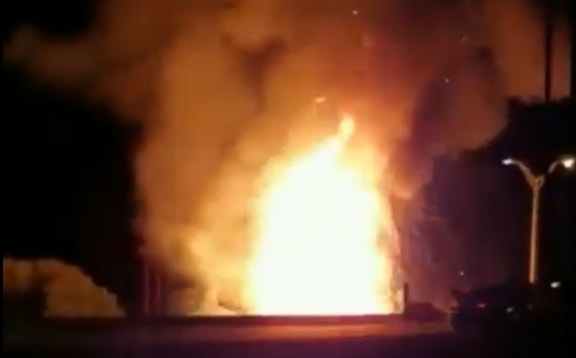 You may have enjoyed a fun-filled Labor Day Weekend, but for pubescent boys around the country, they suffered a calamity when an 18-wheeler burst into flames because of an Axe body spray explosion. Hundreds of cans of body spray erupted and caused a fire so big that it shut down an interstate highway.

Around 4 a.m. on Friday morning, a tractor trailer was traveling down Interstate 35 in Benton, Texas when the driver noticed flames coming from the back of his vehicle. He quickly pulled over, but it was too late. The Axe body spray had already been released and once Axe body spray is out of the bottle there is no way to contain it. And quicker than you can say: “Phoenix Daily Fragrance,” the truck exploded.

FIRE VIDEO: Viewer David Clauder sent us this video from the fire on I-35 this morning.

The fire was caused by Axe Body Spray cans that had exploded after an accident: https://t.co/mXxjfSPnod pic.twitter.com/HfeXutWqKg

Thank God that smell-o-vision hasn’t been invented yet.

Now this is real toxic masculinity.

The only Axe body spray cans that were not harmed in 18 wheeler fire @KWKTFOX44 pic.twitter.com/b0azShs1Na

It’s as if this courageous truck sacrificed itself for the good of the world.

Pour out some Dark Temptation Axe body wash for the 16-year-old boys who will have to go back to school without any overpowering body spray that they think makes girls like them but actually singes their nostrils and makes them queasy.

Thankfully there were no injuries from the Axe-ident. The highway was closed off for several hours. State official say the blaze was so intense that they need to replace three lanes of the interstate and both shoulders. But they just might not want the pungent Axe body spray to linger in their town and who could blame them.

For young men around the world, Axe body spray is their shower substitute to mask the biting awfulness of their body odor. Without the faux cologne they will be forced to take an actual shower.

The internet had some jokes about the fire caused by the migraine-inducing chemical cologne that smells like a boys high school locker room.

“Women passing within scent of the truck were seen to reflexively put headphones on and spontaneously mention that they have boyfriends.” https://t.co/kqExP9wkQ9

Where are all the women running in the direction of the wreckage as seen in their advertisements??

"Smell that? You smell that? Axe Body Spray, son. Nothing else in the world smells like that. I love the smell of Axe Body Spray in the morning…The smell, you know that gasoline smell, the whole highway. Smelled like… Victory.”#AxepocalypseNow

A truck carrying Axe body spray exploded all over a highway in Texas and a Junior High Dance spontaneously popped up.