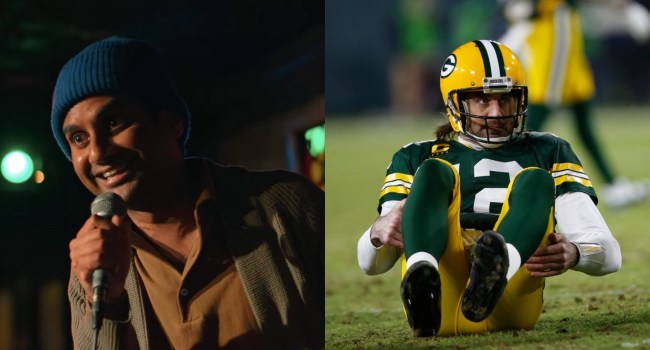 In his new standup special on Netflix, Aziz Ansari dedicated a portion of the set to the divisive 2021 season that Green Bay Packers quarterback Aaron Rodgers experienced.

While he said he doesn’t believe that Rodgers (or Nicki Minaj) is “an idiot”, Ansari did have some fun at Rodgers’ expense, making the point that it shouldn’t be all that surprising that a football player came to such a conclusion.

“Aaron Rodgers… He’s a football player. He read some articles, he got skeptical, he did some research. Are you stunned he came to the wrong conclusion?” Ansari joked.

“Did you really think he was going to crack the case? Did you think Fauci was going to be out there like ‘I just got off the phone with Aaron Rodgers!’. This poor guy — it’s like we’re all in high school and we’re making fun of the quarterback for doing bad on the science test. ‘You’re a dummy, Aaron! You’re a dummy! You don’t know anything, do you? You’re a dumb-dumb!’. This guy makes a living getting hit in the head. Can we cut him a break?”

Ansari then addressed Rodgers decision to mislead the public about his status during the season:

“I guess he did kind of lie, right? They were like: ‘Are you vaccinated?’ And he was like ‘I’m… immunized. My doctor gave me some powders from Jamba Juice.’

“I guess he did come off a little arrogant in some of those interviews. He was out there and was like ‘Oh, you know, I’m a critical thinker.’ Oh no! Was he running the scientific method? ‘Question: should I get the vaccine? Hypothesis: I don’t think so!’ Data gathering: listen to some podcasts and talking to a few sketchy doctors. Conclusion: no way, Jose!

Rodgers certainly hasn’t been shy about his current divisiveness, as he recently said on The Pat McAfee Show that the “only reason” people were rooting for the Green Bay Packers to lose — which they did to the San Francisco 49ers by a score of 13-10 in the NFC Divisional Round — was due to him.