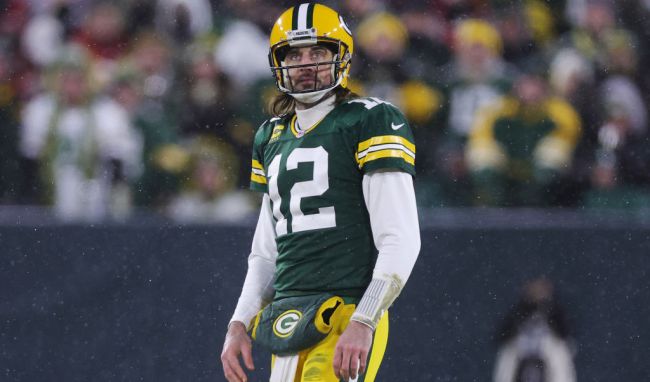 Green Bay Packers quarterback Aaron Rodgers made his regular weekly appearance on The Pat McAfee Show on Tuesday and discussed how he believed the “only reason” people were rooting for the Green Bay Packers to lose in the playoffs was his vax status.

“I realize that I’ve been divisive this season by my vaccination status and by my willingness to talk about it — to talk about the research that I’ve done and my own opinions — I take accountability for that,” Rodgers said.

With the 13-10 loss to the San Francisco 49ers in the Divisional Round of the NFL playoffs, Rodgers is now 0-4 against the Niners in the postseason during his career, with an overall playoff record of 11-9 as a starter.

To make matters worse for Packers fans, there’s a very real chance that Saturday’s loss was Rodgers’ final game in a Green Bay uniform, as the defending (and presumed) NFL MVP says that he does not want to be part of a rebuild. Packers head coach Matt LaFleur, however, says that a rebuild is not necessary and that the organization is hopeful that the 38-year-old QB returns to the organization.