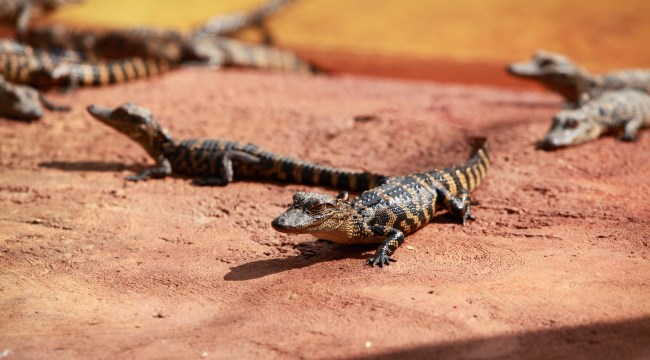 Remember back in June when I expressed some concern over the frightening changes taking place in the animal kingdom after a semi-truck collided with a 463-pound alligator and the gator somehow wasn’t killed instantly?

That event combined with a mountain lion getting blasted by a car, destroying the vehicle, then just running off, caused me to question whether or not the animals these days were getting a hell of a lot tougher than they used to be back in my youth.

Then this month we reported about wasps creating terrifying, car-sized “super nests,” giant jellyfish bigger than a human being, and Alabama police warning citizens about the dangers of “meth gators,” and my concerns have just about turned into a full-blown panic.

So this latest story about hundreds of baby crocodiles not only living, but thriving in the the canals surrounding the Florida Power & Light (FPL) nuclear power plant in South Florida is not helping things.

The worst part? People at the FPL nuclear power plant are actually encouraging it!

According to the Associated Press…

From January to April, Michael Lloret, an FPL wildlife biologist and crocodile specialist, helps create nests and ponds on berms for crocodiles to nest. Once the hatchlings are reared and left by the mother, the team captures them. They are measured and tagged with microchips to observe their development. Lloret then relocates them to increase survival rates.

“We entice crocodiles to come in to the habitats FPL created,” Lloret said. “We clear greenery on the berms so that the crocodiles can nest. Because of rising sea levels wasting nests along the coasts, Turkey Point is important for crocodiles to continue.”

At one point crocodiles in America were close to extinction, but thanks to the team at FPL, they are now just “endangered” as they have tagged 7,000 baby crocs since the program was established.

“American crocodiles have a bad reputation when they are just trying to survive,” Lloret said. “They are shy and want nothing to do with us. Humans are too big to be on their menu.”

Whatever helps you sleep at night, Mr. Lloret.