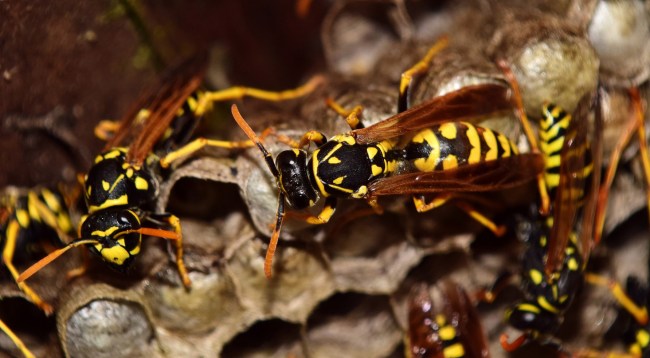 How does something called a “super nest” the size of a small car filled with over 10,000 wasps sound? If you said, “terrifying,” then have we got a treat for you.

Scientists have issued a warning to the citizens of Alabama and Georgia to take precautions this summer because they have already found several of these “super nests” and they expect that number to grow significantly in the coming months. It’s like the Beeocalypse of 2014 is starting all over again.

“Now I’ve gotten reports in of maybe as many as 15 more,” Charles Ray of the Alabama Cooperative Extension System (ACES) told WSFA News.

Ray also said that the number of “super nests” already found in the month of May puts them on pace to break the mark of 90 “super nests” they found in 2006. In 2006, the first “super nest” wasn’t discovered until June 13th. He also stated that three people were seriously injured as a result of these giant nests in 2006.

Imagine a colony of yellow jackets the size of a car, filled with 15,000 stinging insects. Now, imagine more than 90 in the state. It happened in 2006 & an Alabama Extension entomologist says 2019 may mirror 2006. https://t.co/SVW5YhIMnt @spann @AlfaFarmers @wsfa12news pic.twitter.com/EfyCicyXHF

In a normal year, they usually only find one or two of these nests filled with three to four times more wasps than a regular nest.

“These perennial nests may be several feet wide and have many thousands of workers, far more than an average nest,” Ray said in a press release. “We have found them attached to home exteriors and other places you might not expect to find yellow jackets.

“The most workers I have counted in a perennial nest is about 15,000 or about 3 to 4 times more than a normal nest,” said Ray. “However, one nest in South Carolina was documented with more 250,000 workers.”

James Murphy, a University of Georgia agricultural agent who specializes in yellow jackets [a type of wasp], is now warning that the huge nests could also form in Georgia, according to WSB-TV.

“Yellow jackets will defend the nest to the death, fighting tooth and nail,” said Murphy.

The reasons these nests become so big is that in places where the winter is mild, the nests and some of the wasps survive so they just keep adding on to their existing home the following year.

Xing Ping Hu, an Alabama Extension entomologist, said yellow jackets are responsible for almost all of the stinging deaths in the United States.

“Unlike other stinging insects, yellow jackets like to sting people,” Hu said. “Unlike honey bees, yellow jackets do not lose their stringer, so each insect can sting repeatedly and generally attack in large numbers. They are especially dangerous in the summer.”

If you do run into one of these wasp “super nests” removal of them is best left to professionals, and according to ACES, “Under no circumstances should anyone attempt to treat ground nests by pouring gasoline or other generic chemicals into the nest.”