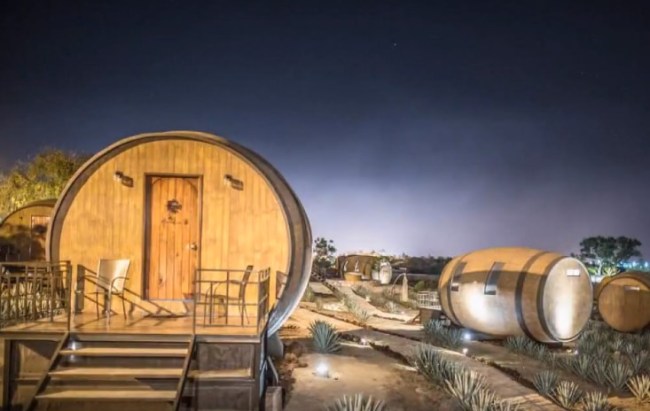 You drink tequila, but have you ever thought about living like tequila? If you head to Tequila, Mexico, you can now sleep in a giant barrel that is like the ones that spirits such as bourbon, whiskey, rum, and tequila are aged in.

Located in the western Mexican state of Jalisco is the Matices Hotel de Barricas, a place where you can actually sleep in an aging barrel. A short drive from the bustling city of Guadalajara, in the heart of tequila country, are several huge wooden barrels in the middle of an agave field.

Inside each barrel is beautifully painted murals on the walls, king-sized beds, and a rain shower. Outside is Casa Cofradia’s agave fields featuring the heavenly plant that makes tequila. A barrel room starts at around $165 a night.

The hotel has a restaurant steps away as well as a bar that serves… you guessed it – tequila. There are several tequila distilleries nearby including Jose Cuervo and Casa Noble.

You can watch the hard-working jimadors performing the difficult task of harvesting agave. By the end of the day, you’ll fit in nicely in a giant oak barrel because you’ll be loaded with tequila.