WATCH: BASE Jumpers Leap Off Nashville Rooftop Bar – The Best Way To Skip Out On Your Tab 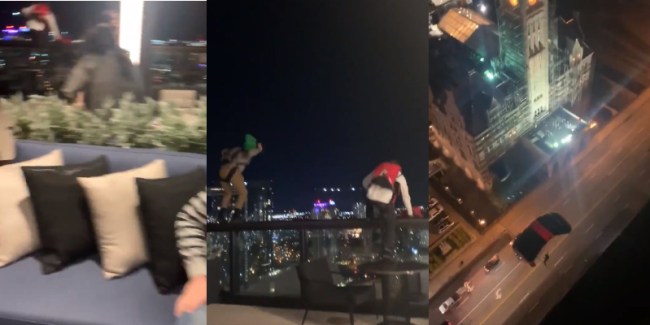 Stop me if you’ve heard this one before. Two men walk into a bar…they jump off and parachute down to the ground. Viral video shows two men saunter into the rooftop lounge of the Grand Hyatt on Broadway in downtown Nashville on New Year’s Day at around 6 p.m.

With revelers still celebrating the ringing in the new year, the gentlemen walk straight to the ledge of the rooftop bar and then use tables to climb over the railing with bar patrons looking in disbelief. The men then BASE jump off the Grand Hyatt, which has 25 floors. That’s one way to skip your pricey bar tab. The BASE jumpers then glide down to the ground.

Video was taken by Amanda Bagley, who told Nashville’s WSMV-TV, “I would be lying if (I said) I wasn’t experiencing some trauma. There was staff shouting that you can’t do that.”

“I noticed one of the guys walk in because of his gear. He just stuck out with the helmet and the GoPro,” Bagley told USA Today. “Then I scanned lower to see the harness, then the bundled parachute in his right hand. In a moment of focus, I started filming. I wanted to make sure I captured what was going on.”

“It was absolutely shocking,” Bagley said. “I felt like I was in a movie.”

The Grand Hyatt confirms that the two men were staying at the hotel, and have been banned for the BASE jump stunt.

“We can confirm that an isolated situation occurred in the early evening on January 1, 2021, at Grand Hyatt Nashville involving two guests of the hotel. Two guests wearing parachutes jumped to the street level from the hotel’s rooftop lounge,” the Grand Hyatt said in a statement. “The hotel immediately engaged local authorities, and the guests were subsequently evicted and banned from the hotel. We vehemently condemn this kind of reckless behavior.”

No arrests have been made.

Imagine the possibilities of wearing a parachute at a bar: