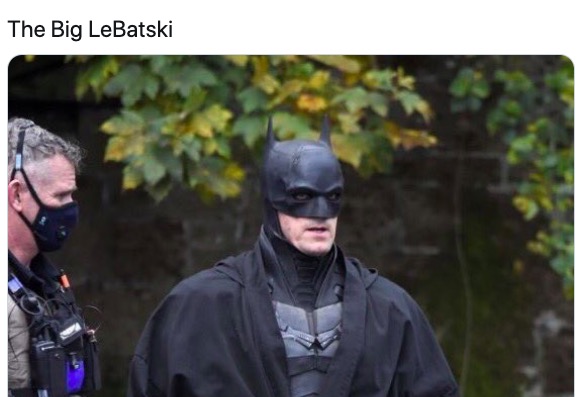 Now, to be clear, I’m not entirely sure whether or not that’s actually Robert Pattinson in these photos, but for the sake of a descriptive title, I just assumed it was. Either way, it’s still the Batman from Pattinson’s upcoming film and he’s wearing a robe, so really, nothing else matters. My mom used to tell me to never look a gift horse in the mouth, and while I still haven’t figured out exactly what that means, I reckon it’s something along the lines of “when Batman pops up wearing a bathrobe, don’t ask any questions, just enjoy it.”

Despite the fact that Liverpool has recently been placed back under lockdown due to the spread of the coronavirus, The Batman continues to film in the city, particularly at some of Liverpool’s most famous locations like the Liver Building, George’s Hall, and Stanley Park.

While shooting at Stanley Park (right outside of Anfield, up the Reds!), Pattinson — or his stunt-double, whatever — was spotted wearing not only his full Batman costume but a bath rob on top, resulting in one of the more bizarre images of Batman we’ve ever seen. Obviously, the internet had some jokes.

RELATED: ‘The Batman’ Is Filming Again Which Means It’s Time For Colin Farrell’s Penguin Makeup To Break Your Brain

Batman better fight everyone in this movie while wearing his breakfast robe and smoking a cigarette pic.twitter.com/BmeQqLEgOF

I’m loving the Batman in that robe.. I couldn’t help myself🦇 #TheBatman https://t.co/PfCfWwu18n pic.twitter.com/ztumieDB2N

After all, Bruce Wayne is a bachelor, so having him stroll around Wayne Manor with nothing but a bathrobe and a cigarette wouldn’t be that out-of-character.