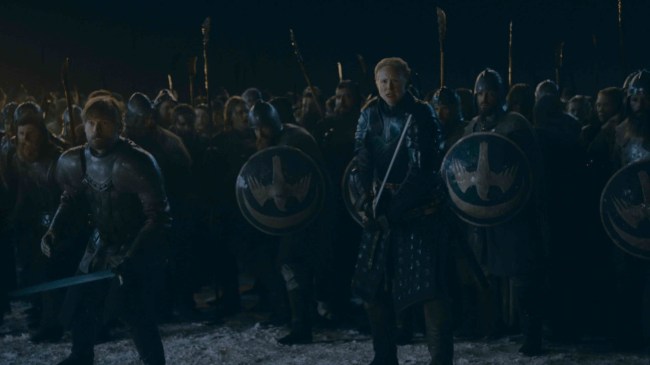 WARNING: This post contains spoilers concerning the Battle of Winterfell from the latest episode of “Game of Thrones.” I probably shouldn’t have to tell you this, but if you decide to keep reading despite not having watched the episode, you have no one to blame but yourself.

After a seemingly endless wait, Game of Thrones fans finally got the chance to see how the Battle of Winterfell would ultimately pan out on Sunday night, and when everything was said and done, I think it’s safe to say it was worth the wait according to the reactions I’ve seen.

The movie-length episode featured the biggest battle sequence in the history of television and there was certainly a lot to keep track of as the Night King and his giant undead posse descended upon our heroes before Arya fucked their shit up.

However, there was one tiny problem when it came to following the action: it was pretty damn impossible to see.

Sure, the fight might have taken place under the cover of night and there was only so much the people holding the line could do to illuminate their surroundings—even with the help of Melisandre—but that didn’t stop viewers from airing their grievances as they squinted at their television sets trying to figure out exactly what the hell was going on.

Me trying to see who’s fighting whom in the dark. #GameofThrones pic.twitter.com/Ztv98xNb84

HBO: Let's make a show about dragons and zombies and spend a gazillion dollars on it

Also HBO: Let's make it so dark literally no one can tell what's happening#GameOfThrones pic.twitter.com/3enAjRQa0G

Turning off my own lights isn’t enough. Everyone in DC needs to turn out their lights for it to be dark enough in this house to see what’s happening in this episode.

Trying to see what the fuck is going on during these dark af battle scenes #GameOfThrones #BattleOfWinterfell pic.twitter.com/T5way8o5XD

Me struggling to watch all the dark scenes in tonight's episode. #TheNightIsDarkAndSoIsMyTV #GameofThrones pic.twitter.com/wQ5Y6kFOpv

The good thing about the inevitable bloodbath is that it's so dark we won't even know who dies. #BattleOfWinterfell #GoTS8 #got

Lord of light show us the episode as the night is dark#GameofThrones pic.twitter.com/BjpJgCd4Es

Plenty of watchers pointed out the people behind the episode might’ve made the conscious decision to make it as dark as it was to stay authentic to the reality of the battle but that doesn’t mean we’re not allowed to be a little salty about it.