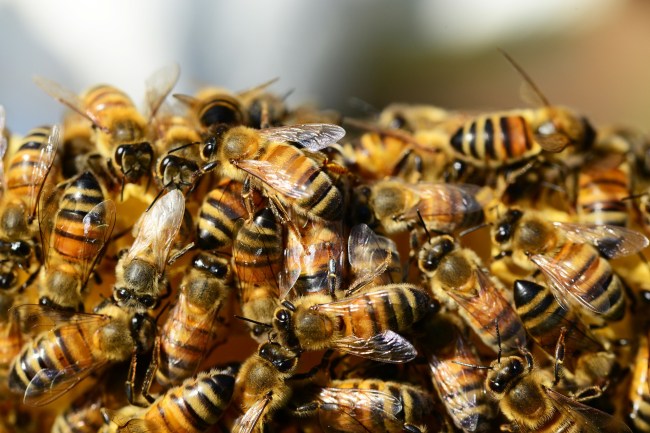 The normally peaceful sands of Cape May, New Jersey were overrun by bees after a massive swarm showed up and took the beach over.

Video footage from the beach in Cape May shows a swarm of thousands of bees landing on beach gear and umbrellas, overtaking the area entirely. They eventually concentrated the swarm on a chair with a patterned red and white towel and it looks like something you’d expect to see on a show about beekeepers but sure as heck NOT on a beach in Cape May.

According to reports, a local beekeeper by the name of Allen Brown was able to corral the bees inside of a cardboard box that he was then able to seal up and remove the massive swarm of bees from the beach. Surely a few got through the cracks but this seems like the best possible resolution for all parties involved.

NJ.com reports this went down at Steger beach between Jackson and Perry streets in Cape May earlier this week around 3pm on Tuesday. Check it out:

A local resident by the name of Dean Bloemer says it’s unclear if anyone on the beach was stung by he says the swarm of bees wasn’t aggressive. It was Dean Bloemer who contacted the local beekeeper to remove the swarm from Steger Beach and restore Cape May to its typical summertime chill.

If you’ve got a few minutes and want to learn about why bees swarm here’s a 7-minute clip from a beekeeper explaining the phenomenon: