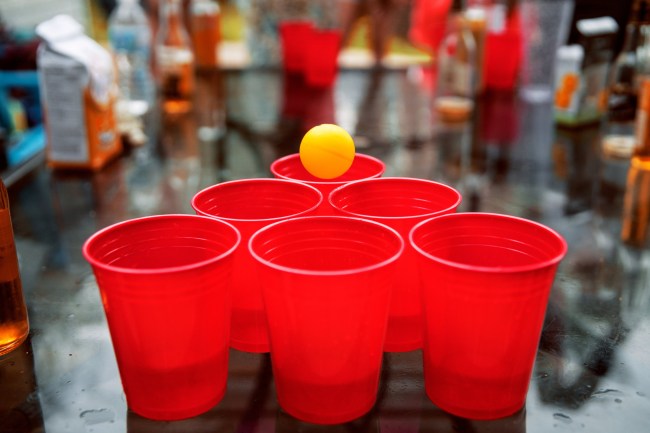 When I think about it, I’ve played beer pong in some pretty disgusting environments: Basements with concrete floors that are gooey with a slimy film from spilt beer. Bar backrooms that probably only get hosed down once a week. Derelict college house kitchens with mouse droppings on the floor because the asshole who lived there was too lazy to take a broom to the floor every once in a while. It’s amazing I’ve never contracted giardia or a serious case of dysentery from the gross bacteria that’s ended up on pong balls which inevitably end up in my cup.

When they found them, researching students offered players new, clean balls in exchange for those in use. They recorded where the game was played and how long it had been in progress.

The students found the most extra bacteria — 3 million of the tiny organisms — on balls being used in an outdoor beer pong game. A ball being used in a game played on carpet had 200 bacteria on it.

Also in the lab, students put bacteria on pingpong balls and put them in a glass of beer. They found a high level of transfer of the bacteria from the ball to the beer, Dawson said.

“Ninety percent of bacteria are probably harmless, but by virtue of sheer numbers, you’re taking a chance of getting sick,” he said.

There are three solutions: 1.) Just be really boss at beer pong and crush six cups in a row, gunslinger-style. You’ll never have to drink because you’re so badass. But that means “practicing” your beer pong shot, which is one of the most pathetic things I can possibly think of doing in one’s free time (seriously… I knew a guy who did this in college, it was sad. He had no friends. And girls tend to not talk to a dude who sets up beer pong practice shots in his dorm room). 2). Only play on carpet and — lololololololol — that’s pretty much impossible if you live in college. 3). Play “lets throw balls at cups filled with water while drinking beer” vs drinking beer out of the pong cups the ball goes into. Just as much fun, especially if someone tries to duck out on drinking.

Or just grow a pair and take that healthy dose of bacteria like a man.