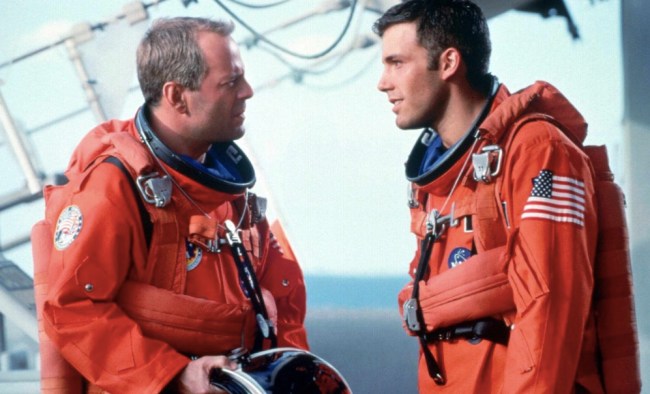 For my money’s worth — and I mean this dead seriously, totally unironically — Michael Bay’s 1998 sci-fi Armageddon is close to being the perfect movie.

It’s got all the genre elements you want in an epic: action, drama, comedy, romance, and sci-fi. It’s got two generational A-listers in the lead roles, Bruce Willis and Ben Affleck, and a bevy of excellent, if not beloved character actors filling out the supporting parts: Billy Bob Thorton, Steve Buscemi, Owen Wilson, Liv Tyler, Will Patton, Michael Clarke Duncan, Peter Stormare, and William Fichtner. Whether or not you know their names, you’ve seen every single one of these actors in multiple movies.

For whatever reason, though (and much to my dismay) Armageddon has spent the two decades since its release become something of an infamously meme’d movie, as evidenced by the fact that Ben Affleck’s DVD commentary of the film — commentary that sees the A-lister dunk all over the film’s core premise of sending oil-drillers to space — still goes viral every so often.

Given that today — July 1, 2022 — is the 24-year anniversary of the film, there’s no better time to enjoy Affleck’s pure, unfiltered ethering of film that helped turned him into one of Hollywood’s biggest actors.

If you do find yourself in the mood to watch Armageddon — and frankly, there’s no better weekend to do so than that of July 4 — it’s currently streaming over on Peacock. You can also check out Affleck’s full commentary on Armageddon below: