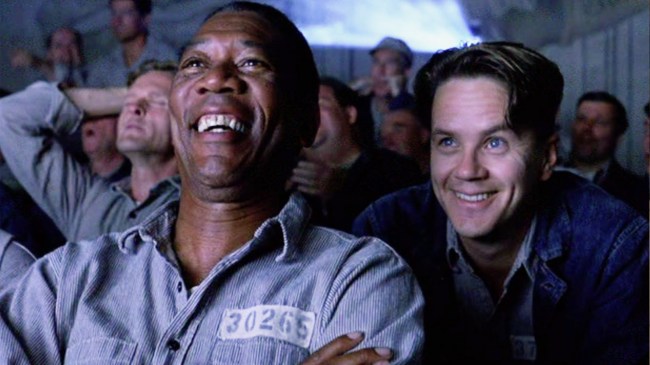 What’s your favorite movie in the last 30 years? There’s a lot to pick from. So many classics, so many Academy Award winners. You could make a case for a number of tremendous films, but according to a new survey, Shawshank Redemption is the greatest movie of the last 30 years.

Showcase Cinemas, which operates theaters worldwide in the U.S., U.K., and Brazil, conducted a poll to find out the most popular movies, film franchises, and actors. When it came to the best movie of the last three decades, the 1994 prison escape drama based on Stephen King’s 1982 book Rita Hayworth and Shawshank Redemption was declared to be the greatest film.

Shawshank boasts a 91% critic review score on Rotten Tomatoes and a 98% rating from the audience as well as a 9.3 review score on IMDB. Shawshank Redemption was nominated for seven Academy Awards in 1995 including Best Picture, Morgan Freeman as Best Actor, Best Adapted Screenplay, Best Cinematography, Best Editing, Best Sound Mixing, and Best Original Score. The movie also received two Golden Globe Award nominations for Best Performance by an Actor in a Motion Picture for Freeman and Best Screenplay.

This list is of the last 30 years so that disqualifies The Godfather. But no Goodfellas?

Listen, Lion King and Independence Day are fine movies, and Die Hard is the greatest Christmas movie of all-time, but are they really better than Goodfellas, The Silence of the Lambs, Back to the Future, Casino or Saving Private Ryan? This is a bad list and whoever participated should feel bad.

The survey also named the top film franchises of the last 30 years.

2. Lord of the Rings

7. Pirates of the Caribbean

The list also named the best actors of the last 30 years.

The list also named the best actoresses of the last 30 years.

The site 24/7 Wall Street composed a “50 Best Movies of All-Time” list in January of this year. To generate the greatest movies of all-time list they used critic ratings from Rotten Tomatoes and Internet Movie Database and based on their results Shawshank Redemption was the third-best film. Notice, despite this being the best movie of all-time list, Goodfellas rightfully made the top ten.

9. One Flew Over the Cuckoo’s Nest

RELATED: Morgan Freeman Revealed The One Thing He Hates About ‘The Shawshank Redemption’