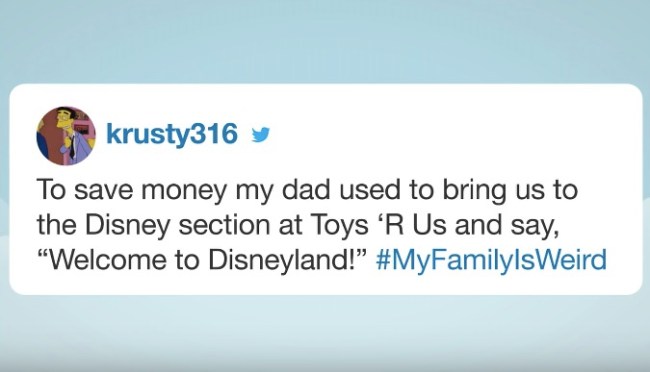 Every family is weird and most people learn this in stages. As we age and come into contact with new people it becomes abundantly clear that our family’s strangeness is not unique.

Thanks to the beauty of social networking we are more connected than ever as a society. It used to be that when we were really young all we knew was our parents, grandparents, cousins, aunts, and uncles. Then you’d hit the age where you started playing sports and having sleepovers at friends houses and were first introduced to other family’s bizarre routines.

Things get *really* weird once you get engaged/married and you make someone else’s family your own and truly find out how weird people are. When that family lets you into their inner fold, that’s when you realize that people, in general, are f*cking bizarre.

For his latest trending hashtag, Jimmy Fallon sent out a tweet asking people to share their weirdest family stories using the hashtag #MyFamilyIsWeird and the responses were nothing short of spectacular (also, find me on Twitter at @casspa). He compiled them into a video last night on The Tonight Show Starring Jimmy Fallon but I know that a lot of you would rather scroll through tweets than watch a video so I’ve included both.

For anyone who would rather scroll through tweets than watch a video, here you go. Also, this grandpa sounds like a genius.

My grandpa would sit in his chair with a blanket because he wasn’t wearing pants. When he got up, he’d yell, “Red light!” and we were to close our eyes. When he thought he was far enough down the hall, he’d yell, “Green light!” He never was far enough. #MyFamilyIsWeird

I guess I’m weird because I don’t think this is all that strange. If you want them to look realistic why not just use real dirt?

People pray after meals? Wait, people in America still pray before meals too???

When it’s time to pray before or after a meal, my family will rate your prayer on a scale of 1-10. 1 is short and shallow, and 10 is long and theologically deep and complex. Sometimes they even tell you “We are looking for a 4 here.” #myfamilyisweird

This dad sounds like he appreciates a good pair of jorts and a crispy Bud Light.

My dad has a glass eye. One of his favorite pranks was throwing it in the pool when the kids were diving for quarters. #MyFamilyIsWeird

This is infinitely weirder than couples who share toothbrushes and that’s already one of the strangest habits any couple can engage in.

I heard my grandparents giggling upstairs once so I went and peeked in their bedroom and found them wearing each others dentures. #MyFamilyIsWeird

My sister cleaned out her hairbrush and mailed it to my other sister just because the oldest hates loose hair and will vomit at the thought of it…. #MyFamilyIsWeird

Dad’s not trying to leave any money on the table.

My Dad dumped what was left of his chocolate milkshake on the hood of my brother’s Jeep because “we’re going through the car wash anyway, may as well get our money’s worth.” #MyFamilyIsWeird

I’d easily adapt this tradition into my own family.

My family won’t sing Happy Birthday. They sing “Arfdee Boofday” which is where you sing or scream any words to the tune of happy birthday. This started with my great-grandparents and is tradition now. We have scared some guests. #MyFamilyIsWeird

I’ve never seen a 70-year-old person get into a fight. What would this even look like?

At my brother's middle school soccer game in TN, my grandpa got angry and started swearing and insulting the ref in Italian…well, the ref came over and started yelling back at him in Italian…and that's how I almost saw my 70 year old grandpa get into a fight. #MyFamilyIsWeird

Sounds like a group of serial killers to me.

#myfamilyisweird We keep food in the microwave when we're not using it, we don't have a couch, we have 1,000 magnets that cover our fridge I don't even know what color it is anymore, we just got doors on every room in the house two months ago…the list goes on.

Isn’t this what you’re supposed to do with electric scooters? I had to ride one in H.S. for 6 months after I tore my meniscus and underwent surgery. I’m pretty sure this was my go-to move.

My parents had to stop going to Sam's Club together because they would always fight in the middle of the store. Why, you ask? Because my dad would get in the electric scooter and continuously run into the back of her heels to get her to "walk faster" #MyFamilyIsWeird

Anyway, you can check out more of these tweets by following the #MyFamilyIsWeird hashtag on Twitter. You can also find me on Twitter at @casspa!