Best Time To Use Tinder, Most Popular GIF, Sexiest Job And More 2018 Trends From The Dating App 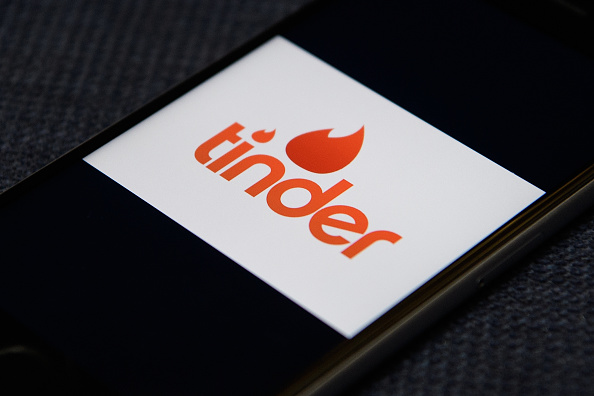 Were the Tinder connections hard to come by in 2018 for you? We’re going to help your chances in 2019 by giving you a Tinder cheat code as to what worked for other people in 2018. We’ll look at the best time to use Tinder, the GIF that was most used, the sexiest job to have, and other pieces of minutiae that you can utilize to increase the right swipes.

Tinder released their first-ever “Year in Swipe,” which is an overview of the top trends on the dating app from 2018. Maybe you don’t have the right career and you can blame your job for your severe lack of right swipes. Women on the dating app found that engineers were the sexiest job for men to have. Hmmm. It says here that the five of the top ten highest-paying college majors are engineering majors. What a coincidence! Coming in at #2 was a three-way tie between model, athlete, and lifesaver. Scholar, doctor tied with creative artist, and musical round out the top hot jobs.

The most used term in Tinder bios was “fun.” You guys are really a modern-day Jane Austen with all your romantic whimsy. Other tops terms included “travel,” “food,” “drink,” “adventure,” “sarcasm,” “professional,” and “smart.” It’s really interesting to see how so many people will simply outright lie on their profiles. The most used slang terms were “HMU,” “extra,” “foodie,” “lit,” “low-key,” “bae,” “woke,” “goat,” “salty,” “savage,” and “deadass.” The most popular emojis were tears of joy, winking, dog face, grinning, and beer mugs. Somehow, the poop emoji did not make the top ten.

For some reason, people are including celebrities in their profile, which apparently an effort to describe themselves despite having ZERO similarities with these famous people — Ryan Reynolds, Larry David, Beyonce, Kim Kardashian, and Blake Lively. The most popular TV shows on Tinder were Friends, The Office, Game of Thrones, Insecure, Stranger Things, and The Bachelor. The most popular music artists were Drake, Travis Scott, Juice WRLD, Post Malone, Sheck West, XXXTENTATION, and Ariana Grande.

The most loved foods on Tinder include pizza, tacos, sushi, ice cream, sandwiches, pasta, and of course guacamole. The most used GIF was Joey’s “How you doin’?” from Friends. Guys, you can be more original than this.

Maybe you are on Tinder at the wrong time? According to the numbers, the best time to use Tinder is on Mondays at 9 p.m. EST. The most active month is August, probably because people are trying to get that one last summer fling before cuffing season.

There were several events in 2018 when Tinder use spiked and the top spot was a little surprising. The #1 most active event in 2018 was the Super Bowl. Many women were bored to tears while watching football and were looking for some company to take them away from their boring Super Bowl party. The next most busy events made a bit more sense because they were music festivals — Bonnaroo and Coachella.

So use these tips and pertinent information to make 2019 your best year on Tinder. 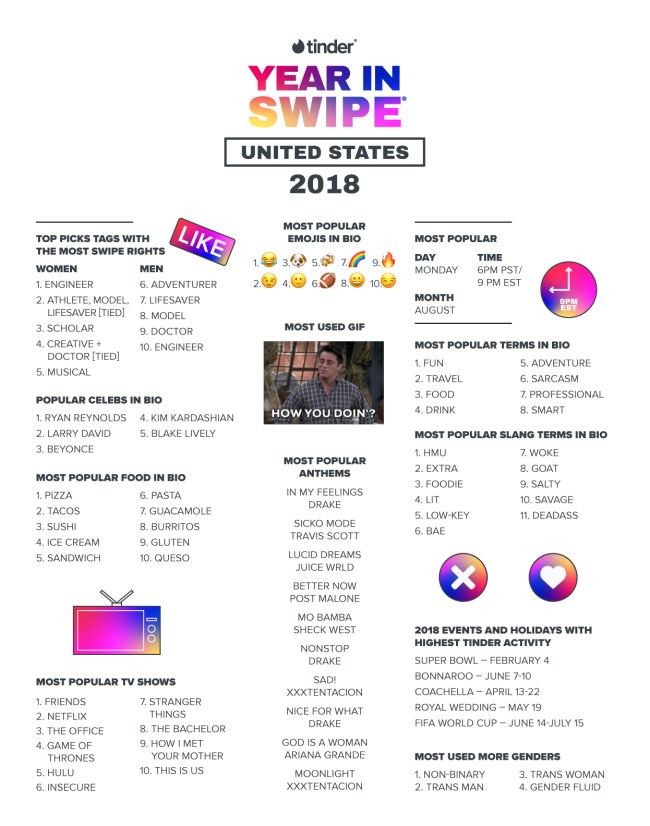