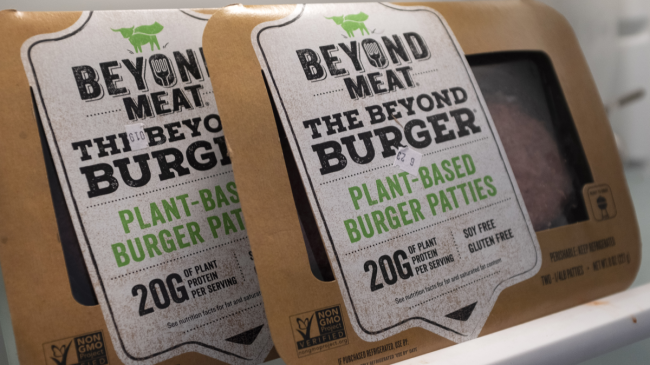 A crazy headline is coming out of Arkansas following the Razorbacks’ 38-27 victory over Missouri State, and it surprisingly doesn’t involve former head coach Bobby Petrino’s return to Fayetteville.

Instead, it revolves around a popular food company executive and a road rage incident that took place after the matchup.

And the details are pretty gruesome.

Doug Ramsey, the COO for Beyond Meat, was arrested on Saturday night for charges of terroristic threatening and third-degree battery. Beyond Meat provides plant-based alternatives to traditional meat meals. The company offers burgers, jerky, breakfast ‘meats,’ and more.

But apparently, there’s just nothing like the real thing.

Beyond Meat COO bites nose off man at football game

The Beyond Meat executive is accused of biting off the nose of a man in parking lot traffic following that Arkansas football game. Here’s more in a report from FOX KNWA in Fayetteville.

Just after 10 p.m., an officer was dispatched to Gate 15 for “a disturbance that had previously occurred in the Stadium Drive Parking Garage (SDPG).” The responding officer found “two males with bloody faces” at the scene.

Ramsey was allegedly in the traffic lane of the structure, attempting to leave, when a Subaru “inched his way” in front of Ramsey’s Bronco, making contact with the front passenger’s side tire. Ramsey got out of his vehicle and allegedly “punched through the back windshield of the Subaru,” according to the report.

The owner of the Subaru then got out and he stated that Ramsey “pulled him in close and started punching his body.” According to the report, Ramsey also “bit the owner’s nose, ripping the flesh on the tip of the nose.”

No road rage incident can be that infuriating, right? I mean to not only punch through the back windshield of the owner’s car, but to then take a chunk of his nose??

And this came after an Arkansas win. Just imagine what would’ve happened if the Hogs had lost to Missouri State!

There were a few reactions to hearing the news, as well as the irony of Ramsey’s working at Beyond Meat.

The Beyond Meat COO was arrested for biting a man’s nose. Once again proving you just can’t beat the real thing.

What a bizarre turn of events.