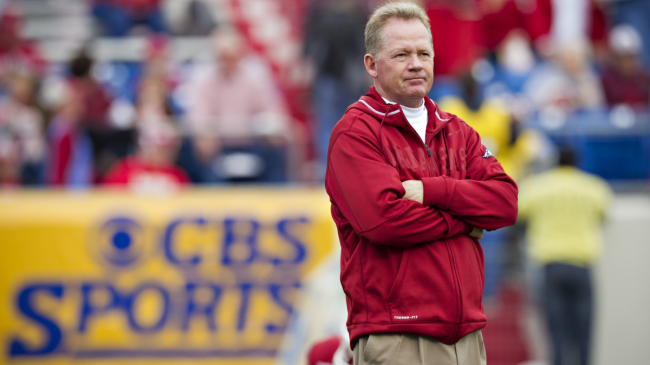 Arkansas will see a familiar face on the opposing sidelines this coming Saturday when former head coach Bobby Petrino takes the field. Petrino is now leading the Missouri State program, which he’ll bring into Fayetteville this weekend.

While he was with the Razorbacks, he took the program to new heights. Arkansas was ranked as high as No. 3 in the nation in Petrino’s final season, winning the Cotton Bowl to cap the campaign.

But the success was short-lived. Petrino was with the team just four seasons before an off-field incident successfully ended his tenure.

The head coach was involved in a motorcycle accident that wound up leading to a major scandal, which was widely publicized. He cracked a vertebra, broke ribs, and was appeared to have road rash across his face. Everyone has the image of Petrino in a neck brace burned into their brain.

But those weren’t the details that had the college football world talking.

On the back of the bike was a 25-year-old woman (not his wife), who also happened to be an Arkansas staffer. She’d begun her job with the Razorbacks just one week prior. She was also engaged to another member in the athletic department at the time of the accident.

The news sparked a huge reaction among fans and media, and in the end, the drama was too much for Petrino to keep his job. But now he’s back in Fayetteville, and a certain detail has grabbed some attention on Twitter.

The Arkansas marketing team has dubbed the return of Bobby Petrino as “Family Weekend.” The irony hasn’t gone unnoticed. A few sports fans took the time to comment on that (intentional?) coincidence on social media.

Whoever in the Arkansas athletic department scheduled Family Weekend for Bobby Petrino's return to Fayetteville needs an immediate raise. pic.twitter.com/0NemhuTlmV

One fan wrote, “That is hilarious,” while another posted, “This clown has to lead his team out of the tunnel on a motorcycle.”

Petrino has been mum on his return to Fayetteville, avoiding most questions from the media.

“I’m sure there will be some feelings and some emotions when I step in the stadium… I think we’ll see when I get there.”

That fall from grace took place more than a decade ago, but it’s pretty obvious that Razorback fans haven’t forgotten.