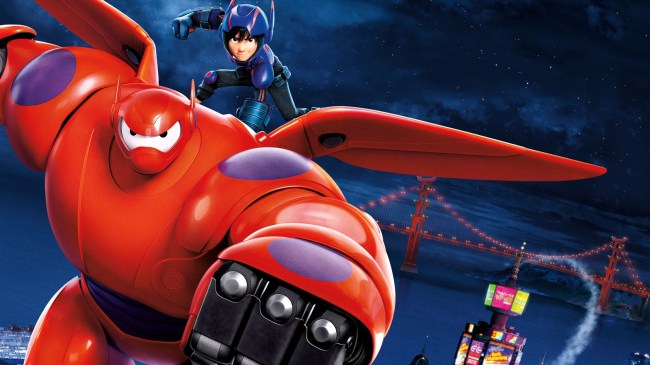 True story about Big Hero 6, which is essentially a JV Pixar movie about superheroes: I actually watched this in college with a bunch of my buddies whilst under the influence of mushrooms. I think it was a Sunday morning in the middle of a typically dull New Jersey winter and we were all hungover as sin. Think it was a Jagermeister hangover, which is particularly devastating due to the syrupy sweetness of the Devil’s Motor Oil. As college kids with nothing to do for the day (most days, really), we decided to wrangle our funds together and acquire some light hallucinogens to relax for the day, have ourselves a laugh, crush some Dominoes, the usual.

After mixing the shrooms in some lemon juice (an easy way to digest them without dealing with the horrendous taste, although I’d suggest ordering a pizza as your Shroom Delivery Vehicle instead), we rolled up a couple of Js and tossed on Big Hero 6, and man, what a fucking ride that was. Not sure I’ve ever been more invested in something than I was in Hiro trying to avenge the death of his brother Tadashi without wading too far into the darkness. I believe that’s the plot, don’t quote me though.

What’s funny about watching an animated movie on mushrooms (unsurprisingly, not the only time I’ve done this, we also once watched Ryan Reynolds’ Turbo up in the Poconos on a paintballing trip) is that their emotional arcs, literally designed for children, also just so happened to be perfectly engineered to entertain, but more hilariously, elicit true emotional investment from the stoned idiots lying on the floor watching. Sure, there’s excitement in life such as running from the police or landing a one-night-stand or getting a promotion, but you don’t know thrill until you’ve seen Turbo win the Indy 500 as a Paul Giamatti-voiced snail circles above on raven while you’re legs are melted from six-hours of paintball and your mind melted is by psilocybin. Pure, uncut electricity.

Anywhooooo, fast-forward six years — Jesus Christ, that’ll be the last time I remind myself it’s been that long since college — and now reports are indicating that two of the main Big Hero 6 characters, Hiro and the Michelin Man lookin’ Baymax, are going to cross-over into the live-action Marvel Cinematic Universe.

Rumored projects they could appear in are ‘Secret Invasion’, ‘Agents of Atlas’, and ‘Doctor Strange 2’.

We have exclusively learned that certain characters from Big Hero 6 will be making their live-action debut in the MCU. We’re not sure on who will be coming but we can at least expect Baymax and Hiro.

Some of the projects we heard about were Secret Invasion, Agents of Atlas, and Doctor Strange. However, we couldn’t get confirmation. There’s also no word on if the actors will reprise their roles in regards to live-action appearances. [via The DisInsider]

Look, Marvel Studios is essentially operating on the fourth dimension of reality that we humans simply cannot comprehend yet. Sort of like Matthew McConaughey in the bookshelf at the end of Interstellar. Whatever they’re doing, as odd as it may seem now, we all know that it’ll eventually turn out great and gross over half-a-billion dollars at the box office or smash record on Disney+. They want to bring in the armor-clad marshmallow robot from an animated movie made over half-a-decade ago? Sureee. Why not?