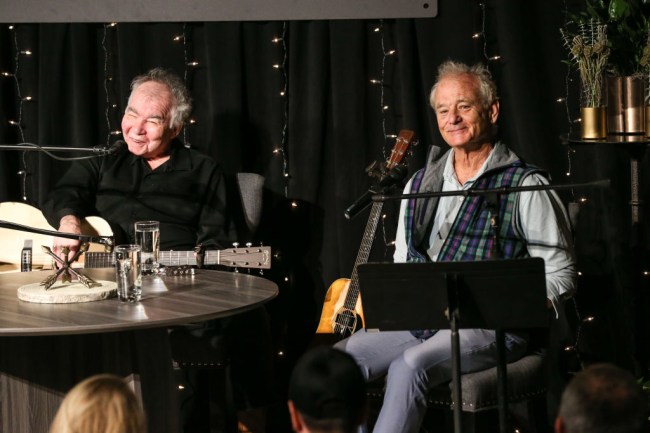 It’s a sad day in a really sad era.

The world lost John Prine today, the beloved singer-songwriter behind some of the most songs in the great American songbook.

On Tuesday, Prine passed away at 73 due to complications from coronavirus.

Prine was a one-of-a-king. A true national treasure.

A brilliant wordsmith with a wry sense of humor, Prine was inspiration to Bob Dylan and, well, pretty much anyone who write a song or told a story in the last 50 years. His songs celebrated what it means to be deeply human with a humorous, oddly existential twist.

A couple years ago, while Prine was recording the album The Tree Of Forgiveness, Murray filmed a video for Prine called “John Prine: Beyond Words.”

It’s a simple story, captured with Prine in the room. Murray recalls a time when he was “a real bummer to be around – a real downer.” In Murray’s own words: He wasn’t depressed, but he wasn’t really happy.

A place we’ve all been.

A great moment of ancient Gonzo wisdom, Murray’s friend, the late, great writer Hunter S. Thompson, told Murray that he’d have to “rely on John Prine for a little sense of humor.”

“I thought that was one of the most adult things you could say,” Murray recalls.

While Murray was “feeling so miserable,” he listened to Prine’s song “Linda Goes To Mars” while listening to the album German Afternoons.

As Murray puts it: “And that was the beginning of the return…”

And that’s the simple yet profound magic of John Prine’s music in a nutshell.

In 2016, when Murray won the Kennedy Center’s Mark Twain Prize for American Humor, he tried to get John there, telling the Washington Post:

John Prine performed with Steel Drivers the same night as my @opry debut & brought Bill Murray along. One of the biggest nights of my career, & was baffled to share the stage with them, yet alone get to shake their hands. RIP John… Thanks for paving the way for the rest of us. pic.twitter.com/sIAExlyqDR

The two were tight, recording the following storytelling session for the Grammy museum in fall 2018.