Billy Mitchell (A.K.A. The Greatest Movie Villain Of All-Time) Is Threatening To Sue To Get His ‘Donkey Kong’ World Record Back 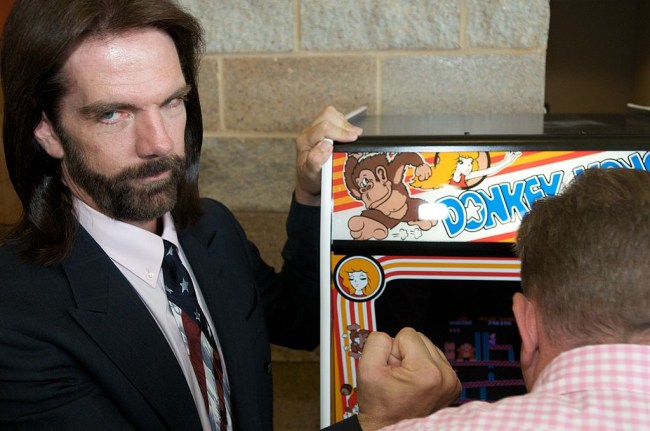 You can argue all day about who the greatest movie villain of all-time is, and while I’m sure there are plenty of people out there who would lobby for the likes of Hannibal Lecter or one of the iconic killers from 80s horror movies, I can confidently say those people have never seen The King of Kong.

In 2007, the world was introduced to Billy Mitchell, a hot sauce mogul and competitive video gamer who found a worthy adversary in the form of Steve Wiebe as the two men competed for the title of the world’s highest Donkey Kong score.

At first glance, the documentary doesn’t sound like a likely hive of scum and villainy, but over the course of its 79-minute run time, the ruthlessly emotionless Mitchell manages to cement himself as one of the most unlikeable people to ever appear on film (Wiebe, on the other hand, seems like a Certifiably Good Dude).

I’ve been oddly fascinated with Mitchell ever since I saw the movie, which toes the line between documentary and mockumentary based on the absurdity of the world it depicts.

However, that world takes itself very seriously, and in the film [SPOILER ALERT] the arcade community is rocked by a scandal when it’s revealed Mitchell used an unsanctioned emulator to record what was the highest Donkey Kong score the world had ever seen at the time (he was the first person to put up over a million points, and while his score has been surpassed, he was recognized for that achievement with a Guinness World Record).

Mitchell fought valiantly to clear his name, but last year, he was officially stripped of his titles, and shortly after, he issued a statement saying he wasn’t going to go down without a fight.

Now, according to Wired, it appears he’s a man of his word, as he’s reportedly threatening to sue Twin Galaxies—the arcade responsible for certifying video game records—and has compiled a 156-page packet of evidence in an attempt to plead his case:

The somewhat disorganized and rambling evidence package is an almost overwhelming amount of information to take in, including data from the chain of custody of the tapes used in Twin Galaxies’ investigation, discussion of Nintendo technicians certifying Mitchell’s boards as authentic, and obscure technical details of how arcade (and emulator) gameplay can be captured on video.

Mitchell also claims Twin Galaxies ignored evidence that pointed to his innocence while embracing that which appeared to prove his guilt—an assertation the arcade denies.

I smell another documentary in the making.