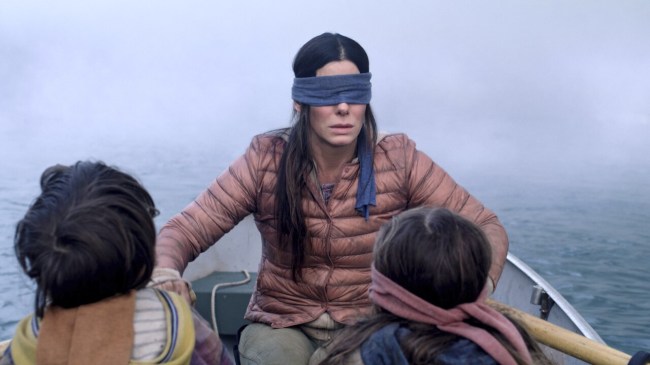 Bird Box is a massive hit for Netflix. The horror film set a Netflix record this week as viewers call Bird Box the “scariest movie ever.”

Bird Box debuted on Netflix on December 21st and within the first seven days the movie is said to have been viewed by 45 million accounts and declared to be the most-watched film ever over the course of a week on the streaming service.

Took off my blindfold this morning to discover that 45,037,125 Netflix accounts have already watched Bird Box — best first 7 days ever for a Netflix film! pic.twitter.com/uorU3cSzHR

This is a huge win for Netflix since Bird Box is an original film by the streaming platform. However, many including The Hollywood Reporter have asked what substantiates “watching the movie?” If the account watched Bird Box for the first five minutes and then returned to their The Cleveland Show marathon to watch the “Great Pancake” episode, does that constitute “watching Bird Box?” Throughout Netflix’s history, they have been extremely reluctant to share viewership numbers and many are questioning why they are doing so now.

Then there are some saying that the Sandra Bullock-helmed thriller is the “scariest movie ever” as well as being the most terrifying and most heartbreaking.

The Most Heartbreaking Scene I've Ever Seen… 😔😢 #BirdBox #BirdBoxNetflix pic.twitter.com/BSYzO72QuW

Man this birdbox is the most terrifying shit ever‼️

I'm honestly bawling my eyes out. Bird box is the most nerve racking, emotional and terrifying movie I have seen this year. Everybody needs to watch it and cry too.

Bird box is the most heartbreaking film i have watched this year. If you want a good cry, watch that. It is terrifying, heart wrenching and just amazingly done. I’m sobbing

Celebrities including Reese Witherspoon, Missy Elliot, and Chrissy Teigen have voiced on Twitter how shaken they are after watching Bird Box and how it is the scariest movie of the year as well as extremely emotional.

Guys, is #BirdBox the scariest movie this year ? 😱 I vote YES

my hands are shaking as I type. thinking of my little toons or miles in the woods alone makes me so sad kdisjsuxusojssuzuhshsixyheh

absolutely had the worst dreams of my life. john died, became a bird, called me on a tiny cell phone as a bird, I took a carry on to the Maldives with bird-john in it, was served strawberry cat on the flight. Woke up crying covered in sweat. bird box got me fucked up

Bird Box is an apocalyptic horror movie where Bullock’s character attempts to survive in a world where mysterious monsters can cause people to commit suicide just by them being seen. Here is the official synopsis:

When a mysterious force decimates the population, only one thing is certain — if you see it, you die. The survivors must now avoid coming face to face with an entity that takes the form of their worst fears. Searching for hope and a new beginning, a woman and her children embark on a dangerous journey through the woods and down a river to find the one place that may offer sanctuary. To make it, they’ll have to cover their eyes from the evil that chases them — and complete the trip blindfolded.

Here is the trailer.