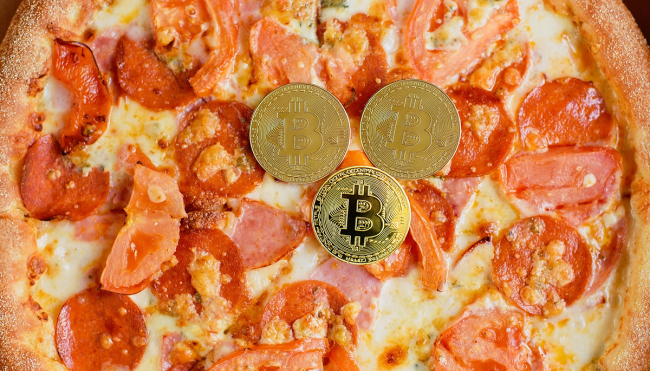 A couple of years ago, an Ironic Twitter user perfectly summed up the platform’s Golden Rule by succinctly outlining the one thing you always want to avoid if you make the decision to violate another Golden Rule about how not to embarrass yourself online: Don’t Tweet.

Each day on twitter there is one main character. The goal is to never be it

Last week, investor and cryptocurrency advocate Anthony Pompliano briefly became that main character courtesy of a video he made announcing the launch of his newest venture: Bitcoin Pizza.

Today I am announcing Bitcoin Pizza – a new national pizza brand that is launching in 10 cities.

The first pizzas will be delivered this Saturday, which is the 11 year anniversary of the infamous bitcoin pizza transaction.

Pompliano revealed the new brand would be launching on the 11th anniversary of the infamous day a dude dropped 10,000 units of the digital currency to get his hands on a couple of pizzas at Papa John’s—an amount that’s worth almost $380 million as of this writing.

In the video, the man commonly referred to as “Pomp” attempted to articulate exactly what makes Bitcoin Pizza so special by outlining his vision for a “new national pizza chain that allows you to eat tasty pizza while also supporting Bitcoin developers.” However, despite prefacing that explanation with the question that was on everyone’s mind, a lot of people who watched the clip still failed to grasp exactly what sets the brand apart.

I headed over to the website to see if it could clarify any of the confusion only to emerge more baffled than I was before I arrived. As far as I could tell, “Bitcoin Pizza” was built on a business model that involved throwing pies whipped up by preexisting pizzerias into a limited-edition box and doing literally nothing else to differentiate itself.

Sure, there was the “supporting small businesses” aspect and the donations being allocated to the Human Right’s Foundation’s Bitcoin Development Fund, which positions the cryptocurrency as a “tool of freedom” for “individuals in closed societies, or anyone facing hyperinflation, capital controls, sanctions, or financial surveillance.”

Does it seem like a good cause? Sure, but it also seems like there are easier ways to raise funds for it than launching a new pizza chain in 10 different cities. As a result, I felt like I was still missing something, and figured the only way to truly get to the bottom of the mystery was to secure a Bitcoin Pizza myself.

While it was possible to get one delivered, my decision to live in a Decidedly Uncool part of Brooklyn meant I’d have to make the trek to a location in DUMBO.

The checkout process was a fairly painless one. After selecting the restaurant, I had the option to pick from five different varieties named after crypto references I don’t understand (as well as a “Genesis Block,” which normal people might know better as a “house salad”). 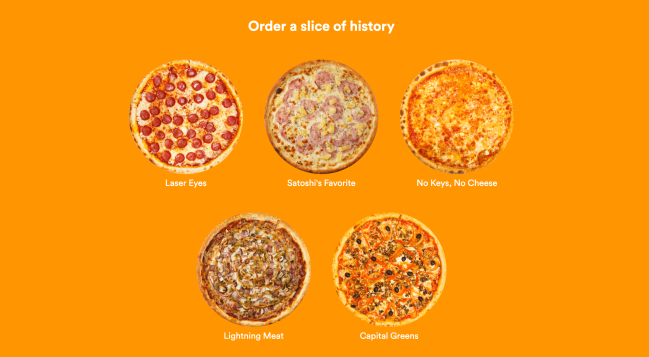 After adding the “Laser Eyes” (a pepperoni pizza topped with “protein to give you the strength to HODL to the moon!”), I went to officially drop over $30 on a 14″ pie only to discover there was no option to buy Bitcoin Pizza with, you know, Bitcoin, which seemed like a fairly notable omission. 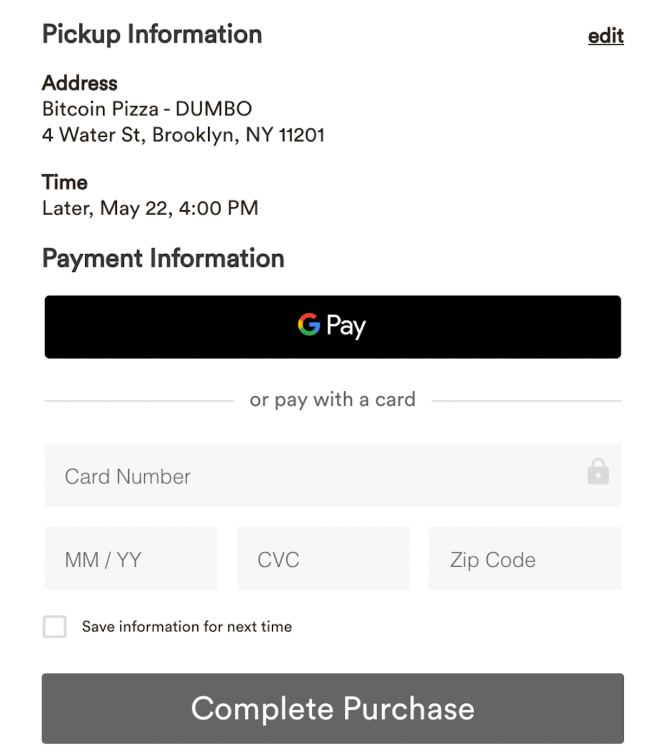 Thankfully, that wasn’t an issue for someone with a grand total of $0 in their crypto portfolio, and after using my dirty fiat money to complete the purchase, I geared up to head to Bitcoin Pizza over the weekend to complete the transaction.

That’s exactly what I did on Saturday afternoon shortly after I received an email reminding me to secure a Bitcoin Pizza warning me “inventory is limited” and they were “selling fast” (but apparently not fast enough to sell out in the five days leading up to the official launch). 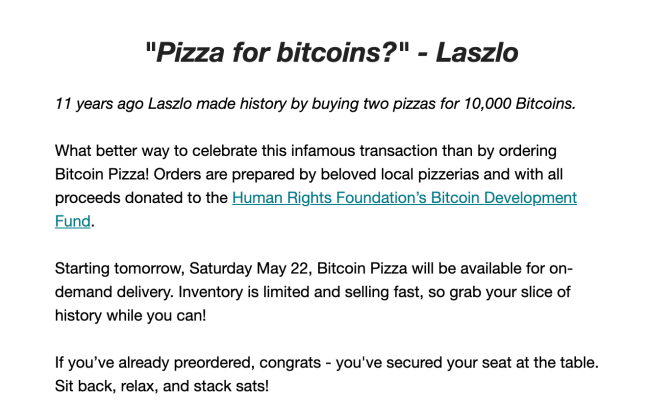 I arrived at the restaurant a few minutes before I was slated to pick up my order at 4 P.M., and this is ordinarily where I would show off a photo of the coveted box before giving my thoughts on the contents inside it. Sadly, I’m unable to do that, as the only thing I was able to experience was the ultimate metaphor for the current state of crypto.

I was pretty sure I was in the right place when you consider the address had led me to a pizzeria sitting in the shadow of the Brooklyn Bridge, but there weren’t any signs to confirm that was the case. While I’d been provided with a customer service number, it only brought me to a prerecorded voice thanking me for calling Bitcoin Pizza before immediately hanging up on the three occasions I tried it.

I lingered outside for a bit before being forced to utter the words “Bitcoin Pizza” in a public setting to an employee who had no idea what I was talking about. Their colleagues were just as confounded, and after spending a solid 20 minutes trying to figure everything out, I decided to pull a Paper Hands and cut my losses before leaving empty-handed.

Shortly after I sat down on my couch after completing my second hour-long subway journey of the day, I received a text informing me my pizza should be ready around 4 P.M., This was a fairly curious development when you realize it was sent over 90 minutes after that time had come and gone. 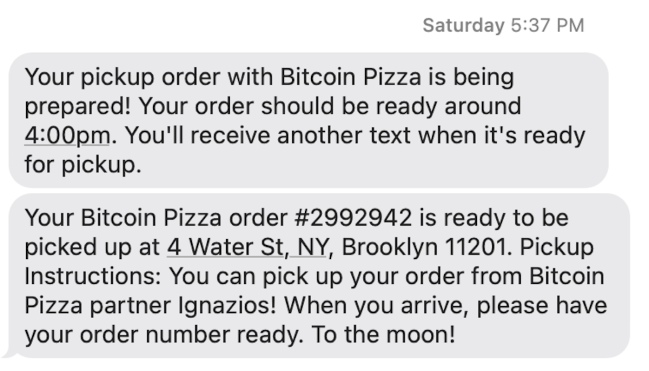 Now, if I’d paid with Bitcoin, I would’ve had to trust whoever has access to the wallet where I sent the funds to reimburse me instead of simply calling my bank and telling them not to charge me for something I never received. Thankfully, I didn’t, so that second option was much more feasible.

Based on what I can tell, other people managed to get their Bitcoin Pizza without any issues. I, on the other hand, got nothing but a lesson in the potential pitfalls of trusting a third party to allow you to trade digital funds in exchange for a tangible asset at your preferred time, meaning I now understand what it was like to try to sell Bitcoin when Coinbase crashed in the midst of a massive selloff last week.