UFC Hall Of Famer B.J. Penn Fights Strip Club Bouncer After Getting Booted For Being Too Drunk And His Performance Is Pitiful 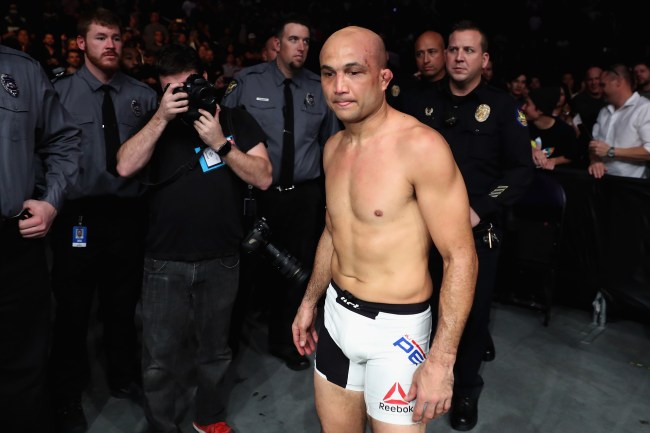 I may be naive, but I’ve always been under the impression that a Hall of Fame UFC fighter would kill 9 out of 10 commoners he physically engaged with in under 3 minutes.

If you’re able to walk away from a street fight with a guy like B.J. Penn, a multi-division champion and the first American Gold medalist of the World Jiu-Jitsu Championship, you tell your grandkids about your valiant battle and wear that shit like a badge of honor.

A strip club bouncer in Honolulu, Hawaii  can claim this silver lining after getting in a fight with the UFC Hall of Famer, with the altercation eventually spilling into the street.

TMZ spoke with the manager of Club Femme Nu who told them that the 40-year-old Penn was escorted out of the bar around midnight because he was acting “very drunk.” That’s when Penn lashed out and started a fight with the doorman.

Penn is the shirtless guy in the video, obvi.

How about the balls on Gumby who decided he had enough and slugged the former UFC lightweight and welterweight champion in the jaw.

Eventually, someone called the cops and multiple squad cars arrived on the scene, but Penn had already left the premises at that point.

This isn’t the first time Penn has indulged in dubious behavior outside the octagon. In April, MMA Junkie reported a restraining order being issued against Penn by the mother of his children after she alleged he abused her over the course of their 10-year relationship. A short time later, Penn had been under an active police investigation for allegedly threatening a taro farmer with a machete in a dispute over trespassing.

Penn’s anger could be spawned from the 40-year-old setting the record for the most consecutive losses in the UFC after losing his 7th straight to Clay Guida at UFC 237 in May. I’d have to say not making quick work of this bouncer is his 8th straight L.