2 Confirmed Cases Of The Black Death Plague In China 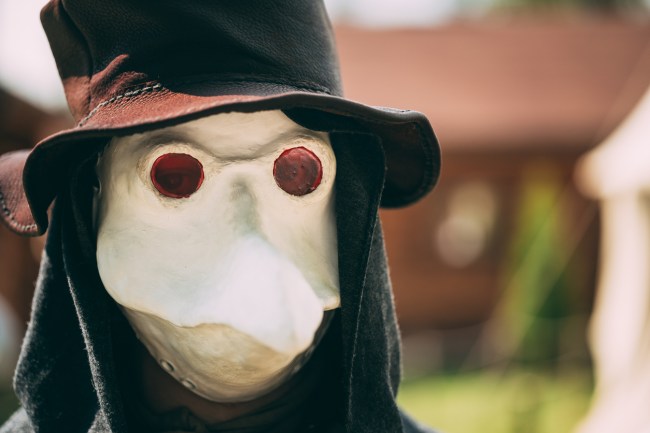 Next season’s hot new trend in clothing might soon be the look you see above, the plague doctor outfit from the 17th and 18th centuries. That is because two people have been diagnosed with the most dangerous form of the plague: the Black Death.

There are two confirmed cases of the pneumonic plague in Beijing, China. Reminder: The black plague wiped out about 200 million or approximately 60% of Europe in the 14th century. So many people died that it actually caused wages to improve because there was a shortage of workers.

Two people have been diagnosed with the Black Death and are being treated at a hospital in China’s capital city. The location is a critical and frightening part of the story because the pneumonic plague is highly-contagious disease that can be transmitted airborne by breathing in droplets of the bacterium Yersinia pestis. Beijing has a population of over 21.5 million.

The patients infected with the plague have been taken to the Chaoyang hospital, and police are guarding the quarantined emergency room. Chinese authorities said that “relevant prevention and control measures have been implemented.”

District officials said that the patients are a married couple from the Inner Mongolia province, a sparsely populated region in northwest China. According to Beijing’s health commission, one patient is in stable condition, and the other one is in critical condition, but not deteriorating.

Health officials have tried to downplay the fears of epidemic spreading throughout the highly-populated supercity. The Chinese Center for Disease Control and Prevention told the public that the chances of a plague outbreak are “extremely low.”

“The (Chinese) National Health Commission are implementing efforts to contain and treat the identified cases, and increasing surveillance,” said Fabio Scano, coordinator at the World Health Organization (WHO) of China. “The risk of transmission of the pulmonary plague is for close contacts, and we understand that these are being screened and managed.”

There are three forms of plagues: pneumonic, septicemic, and bubonic. Pneumonic is the most virulent and lethal of the three. Pneumonic plague can be fatal within 24 to 72 hours. Symptoms include fever, chills, nausea, and vomiting.

In May, another couple from Mongolia died from the bubonic plague after eating raw kidneys from a marmot, which is a wild rodent. The entire district of Nogoonnuur soum was quarantined at the time, and tourists in the area were not allowed to leave.

Here are the worst plagues in the history of mankind.